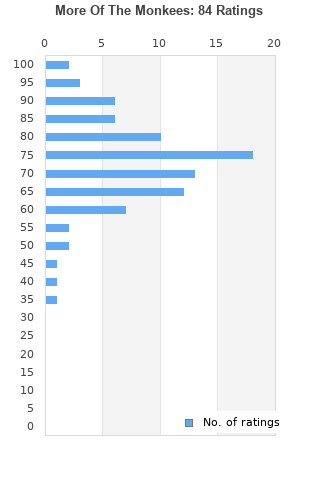 More of the Monkees by The Monkees (Record, 1967)
Condition: Used
Time left: 1h 59m 6s
Ships to: Worldwide
$19.99
Go to store
Product prices and availability are accurate as of the date indicated and are subject to change. Any price and availability information displayed on the linked website at the time of purchase will apply to the purchase of this product.  See full search results on eBay

More Of The Monkees is ranked 4th best out of 20 albums by The Monkees on BestEverAlbums.com.

The best album by The Monkees is Headquarters which is ranked number 2991 in the list of all-time albums with a total rank score of 507. 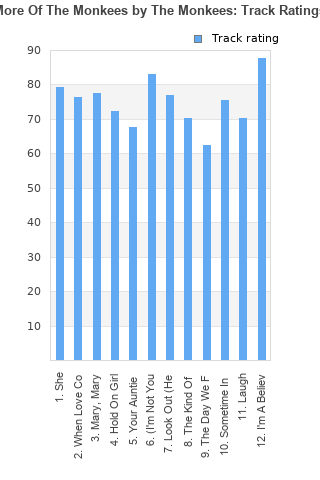 More Of The Monkees rankings

More Of The Monkees collection

More Of The Monkees ratings

Rating metrics: Outliers can be removed when calculating a mean average to dampen the effects of ratings outside the normal distribution. This figure is provided as the trimmed mean. A high standard deviation can be legitimate, but can sometimes indicate 'gaming' is occurring. Consider a simplified example* of an item receiving ratings of 100, 50, & 0. The mean average rating would be 50. However, ratings of 55, 50 & 45 could also result in the same average. The second average might be more trusted because there is more consensus around a particular rating (a lower deviation).
(*In practice, some albums can have several thousand ratings)
This album has a Bayesian average rating of 73.1/100, a mean average of 72.6/100, and a trimmed mean (excluding outliers) of 73.1/100. The standard deviation for this album is 12.3.

More Of The Monkees favourites

More Of The Monkees comments

Best tracks: She, I'm a Believer
Worst tracks: Your Auntie Grizelda, The Day We Fall In Love

A mixed bag but some great songs. The best was yet to come.

The Monkees' second album was rushed out in early 1967 in wake of the success of their TV series and their chart singles. The group had been frustrated by not being allowed to play on the first album, and they had expected that the second album would be different with the members playing a bigger role in the recordings. This was not to be; the album was released without the band's knowledge, and their frustration grew. The group hated the album.

None the less; it's just as good an album as their first. The concept was more or less the same again. Fine pop-tunes written by some of the most prolific songwriters of the time. Neil Diamond wrote their big international hit "I'm a Believer" and the fine "Look Out Here Comes Tomorrow". Goffin/King wrote the fine "Sometime in the Morning" and the great bonus-track "I Don't Think You Know Me". Producers and songwriters Tommy Boyce and Bobby Hart wrote "She" and the now classic "I'm Not Your Steppin' Stone". Neil Sedaka's "When Love Comes Knocking" is another highlight on the album.

Once again the Monkees' own fine songwriter Mike Nesmith was allowed to produce his own songs "Mary Mary" and "The Kind of Girl I Could Love".

A few misses is there too. "The Day We Fall in Love" and "Auntie Grizelda" are tracks that may have had some justification in 1967; today they are close to impossible to listen to. Skip those tracks and enjoy the rest of the album. Good bonus-tracks!!

Your feedback for More Of The Monkees