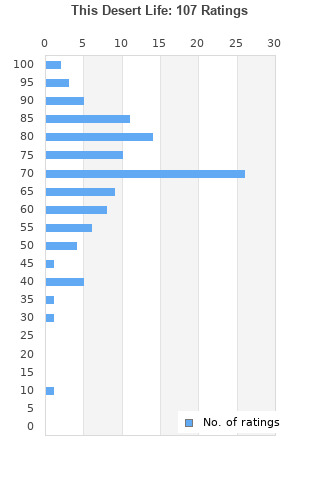 Counting Crows: This Desert Life CD
Condition: Good
Time left: 14h 46m 43s
Ships to: Worldwide
$6.99
Go to store
Product prices and availability are accurate as of the date indicated and are subject to change. Any price and availability information displayed on the linked website at the time of purchase will apply to the purchase of this product.  See full search results on eBay

This Desert Life is ranked 3rd best out of 13 albums by Counting Crows on BestEverAlbums.com.

The best album by Counting Crows is August And Everything After which is ranked number 555 in the list of all-time albums with a total rank score of 3,487. 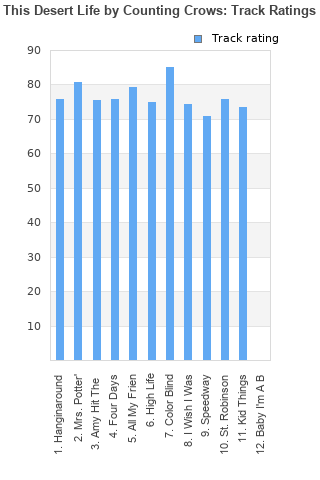 Rating metrics: Outliers can be removed when calculating a mean average to dampen the effects of ratings outside the normal distribution. This figure is provided as the trimmed mean. A high standard deviation can be legitimate, but can sometimes indicate 'gaming' is occurring. Consider a simplified example* of an item receiving ratings of 100, 50, & 0. The mean average rating would be 50. However, ratings of 55, 50 & 45 could also result in the same average. The second average might be more trusted because there is more consensus around a particular rating (a lower deviation).
(*In practice, some albums can have several thousand ratings)
This album has a mean average rating of 70.0/100. The trimmed mean (excluding outliers) is 70.5/100. The standard deviation for this album is 15.7.

On this website, Counting Crows album's get ranked progressively worse in chronological order and it completely makes sense.

Each album sounds like the last in it's instruments and vocal delivery.

This Desert Life has a similar spirit as the debut and is a tighter album than Recovering the Satellites. That is why I consider it better than Satellite's personally.

But grand scheme, bigger than just my opinion review it lands 3rd best

Colorblind is classically depressing. Hanging Around is memorable single.

Amy Hit the Atmosphere is a better Counting Crow ballad. All My Friends is good.

Mrs. Potters Lullabye is in the vein of other road tripping 5 minute Crow's songs.

Only dud for me is I Wish I was A Girl because I don't wish that and don't relate. And the lyrics are kind of condescending to the gender just because Duritz is complaining he can't do what they do. Poor him

It's a good album but fans like me start to realize that Duritz doesn't want to help himself around his fears of loneliness and depression. He isn't getting any wiser around his place in the world and the music isn't either.

The band doesn't grow and neither does he. Which is sad because in his younger days you relate to his struggles in his lyrics. More than the average rock star you want to root for him to be happy and figure it out.

All the more tragic that he doesnt't, and worse, sounds like he exploits it all to make successful music around his brand he has created.

Solid album for sure, though nothing surprising in it at any point, All My Friends is the standout...

One of my favorite bands from the 90's, the third album by the Counting Crows and it sticks in the top 10. The Crows haven't been treated kindly over the past decade, but I'm still a fan, no question. This one wasn't as great as the first two, but it didn't disappoint at all, with great tracks like "Hangin Around" and "Amy Hit the Atmosphere."

It's not bad but I suppose it is a little dull. It sounds basically like the first two but you can tell they're running out of steam.

Your feedback for This Desert Life