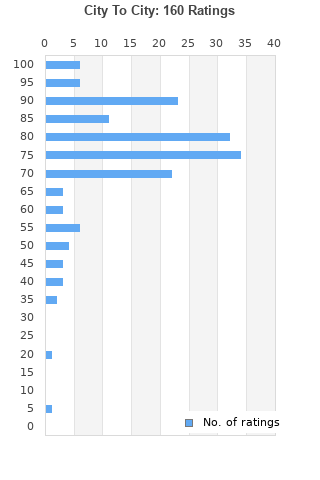 Gerry Rafferty-City to City Vinyl LP MFSL 1-058
Condition: Used
Time left: 6h 7m 26s
Ships to: Worldwide
$64.99
Go to store
Product prices and availability are accurate as of the date indicated and are subject to change. Any price and availability information displayed on the linked website at the time of purchase will apply to the purchase of this product.  See full search results on eBay

City To City is ranked as the best album by Gerry Rafferty. 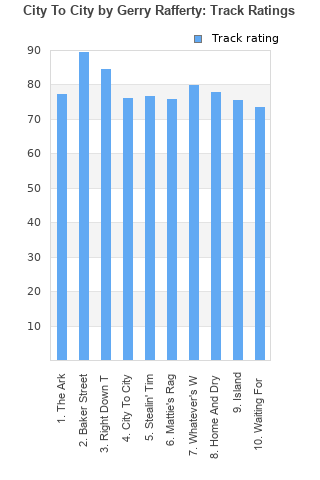 Rating metrics: Outliers can be removed when calculating a mean average to dampen the effects of ratings outside the normal distribution. This figure is provided as the trimmed mean. A high standard deviation can be legitimate, but can sometimes indicate 'gaming' is occurring. Consider a simplified example* of an item receiving ratings of 100, 50, & 0. The mean average rating would be 50. However, ratings of 55, 50 & 45 could also result in the same average. The second average might be more trusted because there is more consensus around a particular rating (a lower deviation).
(*In practice, some albums can have several thousand ratings)
This album is rated in the top 7% of albums on BestEverAlbums.com. This album has a mean average rating of 76.0/100. The trimmed mean (excluding outliers) is 76.7/100. The standard deviation for this album is 14.4.

This was Gerry'g biggie, with three enduring hits, one of which is one of the most recognized songs of all. Outside the hits and a couple other minor tunes, the rest of the album is largely throwaway.

This is a wonderful album. I like every track. If you know Mr. Rafferty's music only for "Baker Street", pick this one up. You'll be in for a very pleasant surprise!

Listen to this at least once a week

Gerry certainly had a very unique sound. Right Down the Line and Home & Dry are faves. But there's a reason Baker Street still gets radio play. A masterpiece.

I love the first four tracks on this album. Unfortunately I find it difficult to play the album in its entirety. The second side just gets a little drab (a fault also applying to Night Owls). There is no doubt when he is on song, he is a wonderful singer songwriter. RIP Gerry!

A uniquely beautiful, full voice served by the best songs he ever wrote, here. Baker Street and Right Down the Line were excellent radio fare but there was much more here, including equally gorgeous songs Whatever's Written in Your Heart (a classic in its own right), the Ark, Island and Stealin' Time.

A sadly underrated and underappreciated record. Same can be said of Rafferty himself and his career. City To City was so much more than just that sax solo on "Baker Street".

Baker Street is the first song I ever remember hearing, it is the song by which all others are judged.

Your feedback for City To City