Music Of My Mind (studio album) by Stevie Wonder 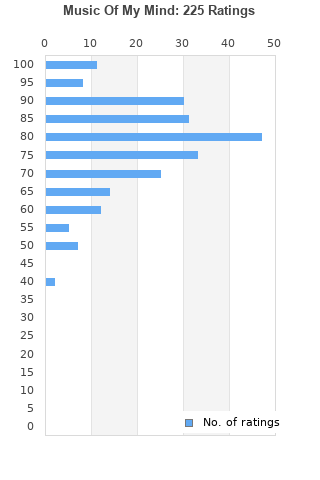 Music of My Mind, New Music
Condition: Brand New
Time left: 13h 40m 18s
Ships to: Worldwide
$14.36
Go to store
Product prices and availability are accurate as of the date indicated and are subject to change. Any price and availability information displayed on the linked website at the time of purchase will apply to the purchase of this product.  See full search results on eBay

Music Of My Mind is ranked 6th best out of 35 albums by Stevie Wonder on BestEverAlbums.com.

The best album by Stevie Wonder is Innervisions which is ranked number 116 in the list of all-time albums with a total rank score of 14,805. 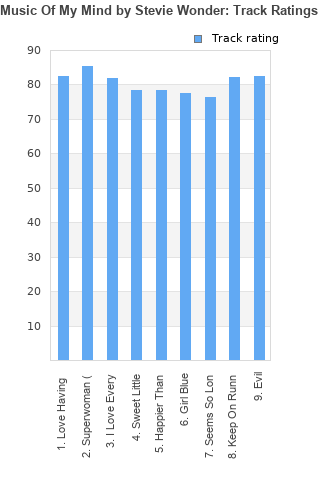 Music Of My Mind rankings

Music Of My Mind collection

Music Of My Mind ratings

Rating metrics: Outliers can be removed when calculating a mean average to dampen the effects of ratings outside the normal distribution. This figure is provided as the trimmed mean. A high standard deviation can be legitimate, but can sometimes indicate 'gaming' is occurring. Consider a simplified example* of an item receiving ratings of 100, 50, & 0. The mean average rating would be 50. However, ratings of 55, 50 & 45 could also result in the same average. The second average might be more trusted because there is more consensus around a particular rating (a lower deviation).
(*In practice, some albums can have several thousand ratings)
This album is rated in the top 3% of all albums on BestEverAlbums.com. This album has a Bayesian average rating of 78.5/100, a mean average of 78.6/100, and a trimmed mean (excluding outliers) of 78.8/100. The standard deviation for this album is 11.9.

Music Of My Mind favourites

Music Of My Mind comments

I must agree with the last comment, the best songs are the first 2 and the last 2. Those 4 songs are really great.

The highlight of the album would be "Keep On Running". This song is as groovy as it gets, and it's even more impressive when you realize Stevie is playing all the instruments himself. You could swear it's a whole band jammin, but no, it's just Stevie playing everything track-by-track.

All in all, an good album by a genius, with great highs, but a few low points too.

Not a bad album the start of his best work in my opinion best tracks the 1st 2 and last 2.

The first in a run of five albums that testify to Stevie Wonder's genius. Obviously influenced by Sly and the family Stone, music of my mind, has a psychedelic rock sound to it, and though it probably doesn't feature any individual classic songs, there are still some fantastic tracks here. Superman, is amazing, it completely changes song half way through. Other highlights include, love having you around, I love every little thing about you, and, happier than the morning sun. Music of my mind, is obviously not a debut album as such, but it certainly feels like one, it's definitely the debut of Stevie Wonder's true artistic birth. Not the best of the five great albums, but Still excellent.

Keep On Running is awesome ! Thw whole is not as good as the next one, but still it's quite dynamic, and even the ballads are not so boring.

Most of the songs on this album are absolutely brilliant and offer a clear glimpse into the genius of the then young and newly "freed" Stevie Wonder.

The first of Stevie's albums under his 2nd Motown contract. His previous album Where I'm Coming From was the first time he had delivered an album to Motown already finished. This was the follow up. This album is much under rated and deserves to be up there with Innervisions and Songs In The Key.... better than Talking Book and Fullfillingness... its tracks are diverse and more experimental than anything before. The stand out tracks being the first 3 tracks, and Girl Blue, Keep On Running and Seems So Long.

Lacks the blockbusters of later work, but Stevie Wonder's genius is starting to shine through. Solid and consistent from start to finish.

This is the guy who knows how to use auto-tune the funky way, giving fuzz to both his voice and synth as on opener "love having you around". "superwoman" praises (and was lifted by janet) soulfully. "keep on running" sports an infectious bass groove and backing vocals. But the funk pervades, from synth to bass to stevie's harmonica (which he only puts down to make love, as on "sweet little girl", of course) -- this is another solid album.

An average album. He would make much better stuff in the following years.

Your feedback for Music Of My Mind