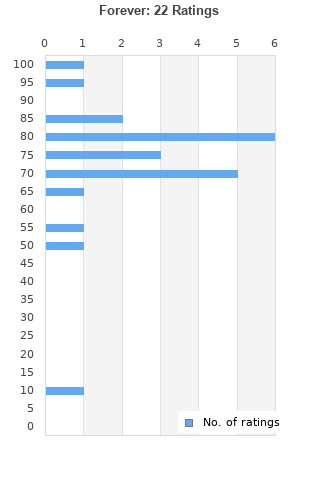 Forever is ranked 22nd best out of 50 albums by Queen on BestEverAlbums.com.

The best album by Queen is A Night At The Opera which is ranked number 99 in the list of all-time albums with a total rank score of 14,961. 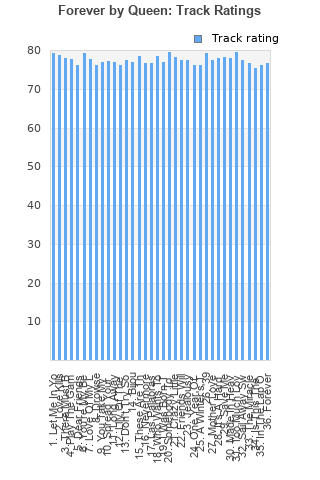 #
Track
Rating/Comments
1.
Let Me In Your Heart Again
Rating: 79 (3 votes)Comments:

Rating metrics: Outliers can be removed when calculating a mean average to dampen the effects of ratings outside the normal distribution. This figure is provided as the trimmed mean. A high standard deviation can be legitimate, but can sometimes indicate 'gaming' is occurring. Consider a simplified example* of an item receiving ratings of 100, 50, & 0. The mean average rating would be 50. However, ratings of 55, 50 & 45 could also result in the same average. The second average might be more trusted because there is more consensus around a particular rating (a lower deviation).
(*In practice, some albums can have several thousand ratings)
This album is rated in the top 16% of all albums on BestEverAlbums.com. This album has a Bayesian average rating of 74.8/100, a mean average of 72.7/100, and a trimmed mean (excluding outliers) of 75.7/100. The standard deviation for this album is 17.5.

A pointless compilation but still enjoyable. It's a ballad album and I had to laugh at the inclusion of, drowse, supposedly to bump up Roger Taylor's writing credits on the album, and, the night comes down, is a disappointing no show. Of the 'new' songs, there must be more to life than this, is terrible, Freddie's version on, Mr. Bad guy, is far superior. Love kills, although not as good as Freddie's original, is a good 'acoustic' based version of the song. The most pleasant surprise and main highlight is the brilliant, let me in your heart again. How did that one slip through the net? An excellent song with a brilliant vocal from Freddie. A fun record, but as I said earlier, hardly essential. Still, it's better than scraping the bottom of the barrel to try and find enough material for a full album.

Your feedback for Forever