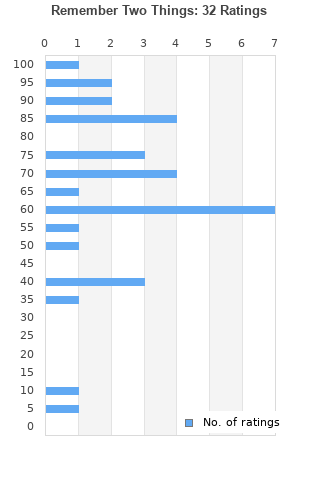 Remember Two Things is ranked 10th best out of 60 albums by Dave Matthews Band on BestEverAlbums.com.

The best album by Dave Matthews Band is Crash which is ranked number 1553 in the list of all-time albums with a total rank score of 1,128.

Tickets from Ticketmaster Get tickets
May
28
Sat
19:30

Tickets from Ticketmaster Get tickets
May
29
Sun
19:30 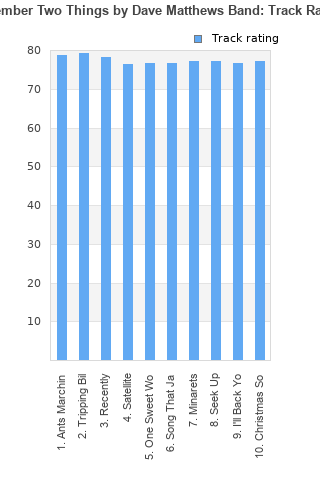 Rating metrics: Outliers can be removed when calculating a mean average to dampen the effects of ratings outside the normal distribution. This figure is provided as the trimmed mean. A high standard deviation can be legitimate, but can sometimes indicate 'gaming' is occurring. Consider a simplified example* of an item receiving ratings of 100, 50, & 0. The mean average rating would be 50. However, ratings of 55, 50 & 45 could also result in the same average. The second average might be more trusted because there is more consensus around a particular rating (a lower deviation).
(*In practice, some albums can have several thousand ratings)
This album has a Bayesian average rating of 67.0/100, a mean average of 65.0/100, and a trimmed mean (excluding outliers) of 65.0/100. The standard deviation for this album is 22.8.

I'm surprised more DMB fans don't give this album a nod. All the songs are good here(more or less) and considered pretty classic DMB songs. And the studio tracks have a quiet darkness to them, not really felt on any other DMB album. Seek Up is definitely the stand out and should be considered a classic certainly in the DMB catalogue. Choosing to fade out with this song and fade back in at the end after two songs have elapsed is an odd idea, which really works here! Though the sounds of nature after that do not.

Poor production but it's a fine album of mostly live stuff. Lots of energy here.

Your feedback for Remember Two Things