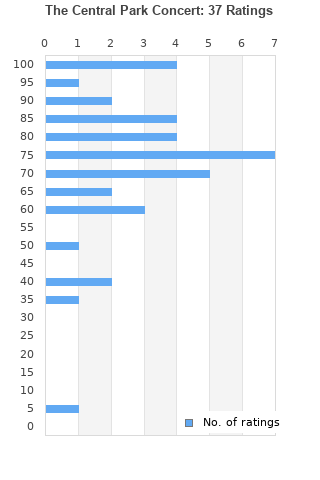 The Central Park Concert is ranked 7th best out of 60 albums by Dave Matthews Band on BestEverAlbums.com.

The best album by Dave Matthews Band is Crash which is ranked number 1497 in the list of all-time albums with a total rank score of 1,187. 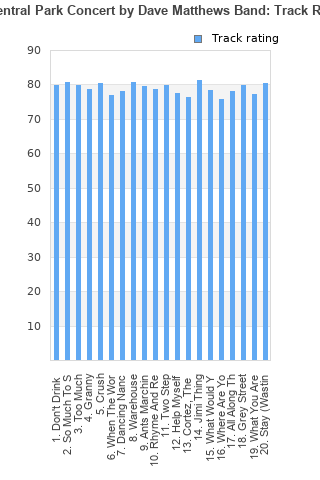 Rating metrics: Outliers can be removed when calculating a mean average to dampen the effects of ratings outside the normal distribution. This figure is provided as the trimmed mean. A high standard deviation can be legitimate, but can sometimes indicate 'gaming' is occurring. Consider a simplified example* of an item receiving ratings of 100, 50, & 0. The mean average rating would be 50. However, ratings of 55, 50 & 45 could also result in the same average. The second average might be more trusted because there is more consensus around a particular rating (a lower deviation).
(*In practice, some albums can have several thousand ratings)
This album is rated in the top 17% of all albums on BestEverAlbums.com. This album has a Bayesian average rating of 74.9/100, a mean average of 73.5/100, and a trimmed mean (excluding outliers) of 75.4/100. The standard deviation for this album is 19.7.

Playing in front of 100,000 people in the middle of New York City made the band play with a fire. Features a killer guest spot by Warren Haynes. This is a recording of the full show and is also available in video.

If you're going to listen to a three-disc live album then I guess it should be this one. It's excellent stuff one disc at a time, but I can't listen to it start to finish without getting bored/antsy. If you can, then I tip my hat to you.

Your feedback for The Central Park Concert