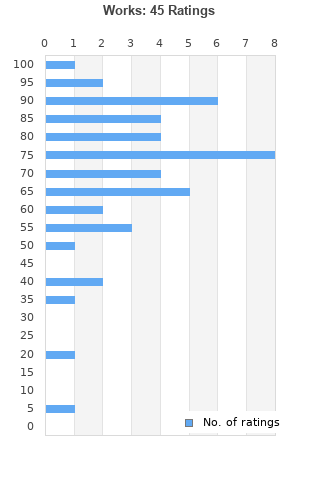 Works is ranked 30th best out of 36 albums by Pink Floyd on BestEverAlbums.com.

The best album by Pink Floyd is The Dark Side Of The Moon which is ranked number 2 in the list of all-time albums with a total rank score of 81,480. 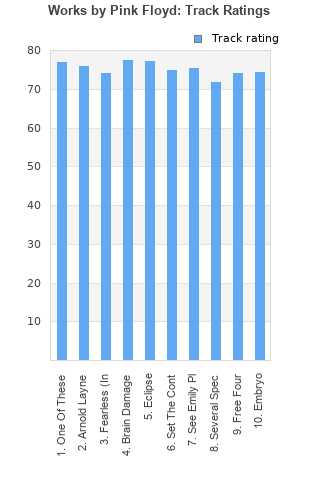 0
8.
Several Species Of Small Furry Animals Gathered Together In A Cave And Grooving With A Pict
Rating: 72 (4 votes)Comments:

Rating metrics: Outliers can be removed when calculating a mean average to dampen the effects of ratings outside the normal distribution. This figure is provided as the trimmed mean. A high standard deviation can be legitimate, but can sometimes indicate 'gaming' is occurring. Consider a simplified example* of an item receiving ratings of 100, 50, & 0. The mean average rating would be 50. However, ratings of 55, 50 & 45 could also result in the same average. The second average might be more trusted because there is more consensus around a particular rating (a lower deviation).
(*In practice, some albums can have several thousand ratings)
This album has a Bayesian average rating of 73.4/100, a mean average of 72.0/100, and a trimmed mean (excluding outliers) of 73.6/100. The standard deviation for this album is 18.6.

Let me start off with I love Pink Floyd and this is not an attack on the material. I hate this album because it’s a crap compilation. It’s like someone threw darts at a rotating board with all of Pink Floyd’s songs on it and whatever was hit went on the record. Just makes no cohesive attempt at making a good compilation. I remember when it came out and the big promo was for unreleased song Embryo. Don’t waste your time, get Relics,The Man and the Journey, the compilation the Early Years rather than this haphazard corporate label shite.

Your feedback for Works