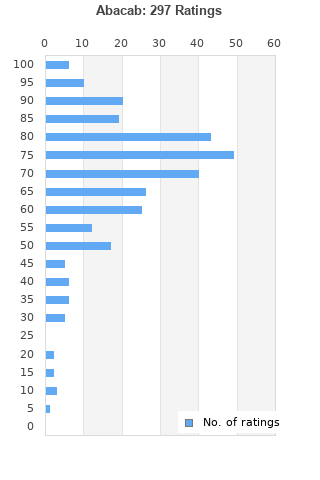 GENESIS ABACAB LP CHARISMA UK 1981 NEAR MINT YRG EMBOSSED SLEEVE VARIATION
Condition: Used
Time left: 1h 56m 13s
Ships to: Worldwide
£19.99
Go to store
Product prices and availability are accurate as of the date indicated and are subject to change. Any price and availability information displayed on the linked website at the time of purchase will apply to the purchase of this product.  See full search results on eBay

Abacab is ranked 12th best out of 32 albums by Genesis on BestEverAlbums.com.

The best album by Genesis is Selling England By The Pound which is ranked number 126 in the list of all-time albums with a total rank score of 13,543. 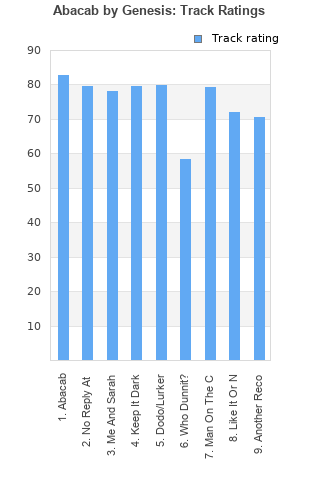 Rating metrics: Outliers can be removed when calculating a mean average to dampen the effects of ratings outside the normal distribution. This figure is provided as the trimmed mean. A high standard deviation can be legitimate, but can sometimes indicate 'gaming' is occurring. Consider a simplified example* of an item receiving ratings of 100, 50, & 0. The mean average rating would be 50. However, ratings of 55, 50 & 45 could also result in the same average. The second average might be more trusted because there is more consensus around a particular rating (a lower deviation).
(*In practice, some albums can have several thousand ratings)
This album has a Bayesian average rating of 70.4/100, a mean average of 69.2/100, and a trimmed mean (excluding outliers) of 70.3/100. The standard deviation for this album is 17.5.

A new sound and it pays off. The music is stripped back and kind of raw but the album has a great energy. I think it's a very underrated album and incredibly progressive by not resting on their laurels. They are applauded by me for trying new things.

Pretty damn good. It slogs at the end, but from a music theory standpoint, there'a still plenty to enjoy. Much better than more popular albums of 1981.

This is the album where you can tell that Genesis had fully embraced pop. It came in varying levels of success (No Reply at All, Man on the Corner: pretty good! Like It or Not, Another Record: not so much), but the fact that Genesis was able to fit right in with the sound while also adopting elements of new wave in the process is pretty impressive, and the enhanced production value only makes it better. Some Genesis fans might tell you that they completely abandoned prog by this point, but that's not true. The title track, the second half of Me and Sarah Jane, and Dodo/Lurker all have some fine prog or prog-inspired moments. Overall, Abacab is uneven with the highs being somewhat high and the lows being pretty low (*ahem* Who Dunnit?), but it's not bad record at all, and it's not one that you should skip if you're considering getting into Genesis.

Worst than any earlier Genesis album. Much worse indeed. 5/10.

Beyond the poppiness and hits, Me & Sarah Jane and Like it Or Not are two of my favorite Genesis songs. A super solid album ridiculously well produced.

I don't think it's as good as "Duke" or the self-titled, but there are still some decent tracks on "Abacab". I used to hate this album, but it's much better than I remembered it being. I still skip "Who Dunnit" though, probably THE worst Genesis song.

The title track has one of the best call & response guitar/synth conversations ever recorded. Explosive song and probably Genesis' last interesting album. Holds up well.

Not bad Genesis album, but as with each release from this record on they sound more and more like a Phil Collins solo combo. Although, keep it dark, is one of the better eighties sings from the band. As far as the album was concerned, the past is the past.

Your feedback for Abacab