...And Then There Were Three (studio album) by Genesis 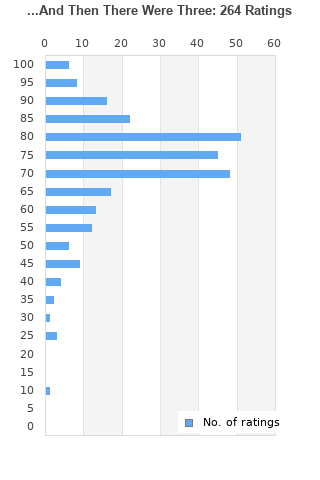 Genesis - And Then There Were Three - Genesis CD XQVG The Fast Free Shipping
Condition: Very Good
$6.84

...And Then There Were Three is ranked 11th best out of 33 albums by Genesis on BestEverAlbums.com.

Listen to ...And Then There Were Three on YouTube 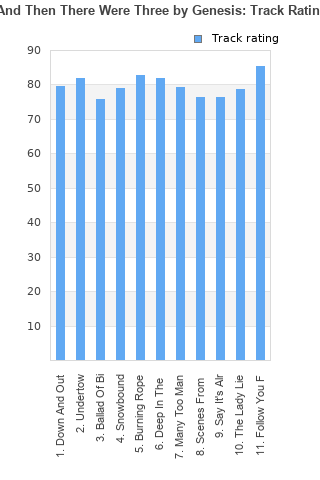 ...And Then There Were Three rankings

...And Then There Were Three collection

...And Then There Were Three ratings

Rating metrics: Outliers can be removed when calculating a mean average to dampen the effects of ratings outside the normal distribution. This figure is provided as the trimmed mean. A high standard deviation can be legitimate, but can sometimes indicate 'gaming' is occurring. Consider a simplified example* of an item receiving ratings of 100, 50, & 0. The mean average rating would be 50. However, ratings of 55, 50 & 45 could also result in the same average. The second average might be more trusted because there is more consensus around a particular rating (a lower deviation).
(*In practice, some albums can have several thousand ratings)
This album has a Bayesian average rating of 72.9/100, a mean average of 72.1/100, and a trimmed mean (excluding outliers) of 72.9/100. The standard deviation for this album is 14.8.

...And Then There Were Three favourites

...And Then There Were Three comments

I think this is an underrated album because it was the first attempt of the 3-man band era. It's still very proggy in spots and hits a lot of sweet spots, even if it is uneven. But I think it's unique!

My first foray into Genesis and I fell in love with it. FYFM was the entry track for me having heard it on Top Of The Pops and while I still think it's their best love song my favourite tracks on the album are Down And Out and Deep In The Motherlode. I like the mood created by the album and it's underated imo. Mike's guitar work needs a shout out and Phil's drumming is more measured but still powerful.

I really don’t get the slating this album receives, it is hands down my favourite post Gabriel Genesis record and is just such a powerful wall of sound. The only weak spot for me is Follow You Follow Me and that’s not terrible, I agree the cover is naff but you know what they say about books! Stand outs for me are Burning Rope and The Lady Lies which are just awesome, give it a chance.

This has been the last album to add to my Genesis collection. If I hadn't seen the near mint vinyl in a second had store for a steal I probably would never have bought this. Beyond what is possibly one of the most crap album covers in my collection, the album is actually not bad at all. A shame Steve Hackett left Genesis but his solo career has provided many great albums for my colletion and four awesome gigs!

The first of many albums in the band's three-piece era, and a pretty darn good one considering how huge the loss of Steve Hackett was. It's not very even, and it kind of loses steam toward the second half, but there are still some really nice prog moments on here (Snowbound, Burning Rope) as well as some fun prog-pop tunes (Down and Out, Follow You Follow Me) that really shone a light on the direction Genesis was heading in. I'd argue that the highs are just as high as the previous album, Wind & Wuthering, but it's not as consistent. Perhaps that makes sense for a new three-piece outfit looking to make some hit singles for the first time in their long music career. Not the very best, but definitely a worthy edition to the Genesis catalog.

It's definitely one of my least favorite Genesis albums but there are several nice songs. I really enjoy Undertow.

Not a bad album, but there's no outstanding songs in here. 7/10.

Better than anything that came after it. It's a very good very pleasant album.

A kind of transitional album for Genesis. It still has it's sound based on their earlier records, but it also heading towards a more pop mentality, with shorter and less complexed songs. I love that jerky rhythm on opening track, down and out, and most of the other songs are fine, and although, follow you,follow me, is a nice enough track, it feels totally out of place here, like a bonus track they've stuck on at the end. This would be the last Genesis album of the seventies, from now on, they would become more straightforward and more of a pop group.

Your feedback for ...And Then There Were Three