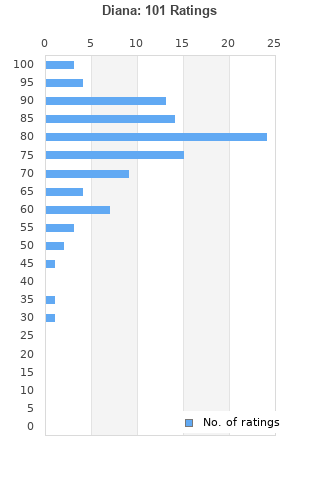 DIANA ROSS UK 7'' LOVE HANGOVER IN EX / EX CON
Condition: Used
Time left: 6m 40s
Ships to: Worldwide
£2.00
Go to store
Product prices and availability are accurate as of the date indicated and are subject to change. Any price and availability information displayed on the linked website at the time of purchase will apply to the purchase of this product.  See full search results on eBay

Diana is ranked as the best album by Diana Ross. 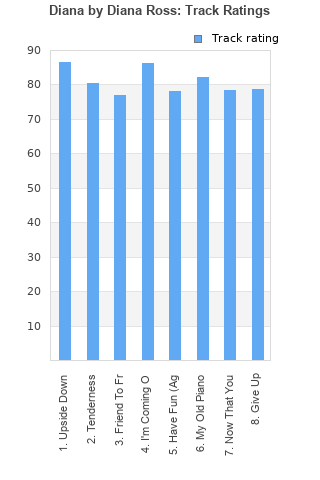 Rating metrics: Outliers can be removed when calculating a mean average to dampen the effects of ratings outside the normal distribution. This figure is provided as the trimmed mean. A high standard deviation can be legitimate, but can sometimes indicate 'gaming' is occurring. Consider a simplified example* of an item receiving ratings of 100, 50, & 0. The mean average rating would be 50. However, ratings of 55, 50 & 45 could also result in the same average. The second average might be more trusted because there is more consensus around a particular rating (a lower deviation).
(*In practice, some albums can have several thousand ratings)
This album is rated in the top 3% of all albums on BestEverAlbums.com. This album has a Bayesian average rating of 78.0/100, a mean average of 77.5/100, and a trimmed mean (excluding outliers) of 78.5/100. The standard deviation for this album is 13.0.

A couple of top-notch tracks with Nile Rodgers really doing work to try and hold this together as an album, somewhat successfully.

Universally regarded as her best album written & produced by Nile Rodgers & Bernard Edwards who are better known as the guys responsible for the success of Chic amongst others. Upside Down & I'm Coming Out are legendary other great tracks on the album are My Old Piano the ballad Friend To Friend & the closing up tempo Give Up.

Brilliant album. Every cut worthy of being a single. Try not dancing when this comes on.

Nils Rodgers is a genius, the true star of this album...

Your feedback for Diana