Made In The Shade (compilation album) by The Rolling Stones 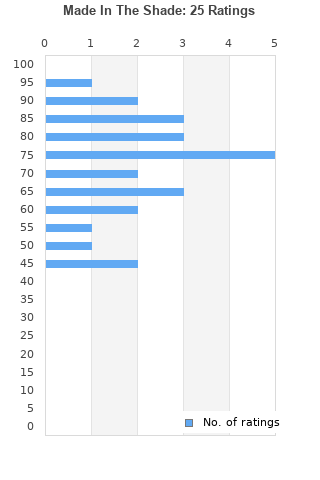 Made In The Shade is ranked 52nd best out of 96 albums by The Rolling Stones on BestEverAlbums.com.

The best album by The Rolling Stones is Exile On Main St. which is ranked number 43 in the list of all-time albums with a total rank score of 25,851. 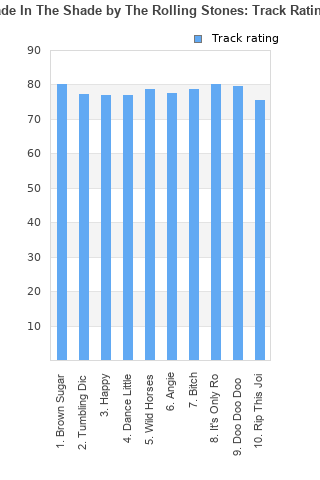 Made In The Shade rankings

Made In The Shade collection

Made In The Shade ratings

Rating metrics: Outliers can be removed when calculating a mean average to dampen the effects of ratings outside the normal distribution. This figure is provided as the trimmed mean. A high standard deviation can be legitimate, but can sometimes indicate 'gaming' is occurring. Consider a simplified example* of an item receiving ratings of 100, 50, & 0. The mean average rating would be 50. However, ratings of 55, 50 & 45 could also result in the same average. The second average might be more trusted because there is more consensus around a particular rating (a lower deviation).
(*In practice, some albums can have several thousand ratings)
This album has a Bayesian average rating of 71.0/100, a mean average of 70.2/100, and a trimmed mean (excluding outliers) of 70.2/100. The standard deviation for this album is 13.0.

Made In The Shade favourites

Made In The Shade comments

A really good compilation featuring most of their best tracks between 1971-74. Could easily have been a double album and included Sister Morphine, Moonlight Mile, Rocks Off, Loving Cup, Soul Survivor, Star Star, Luxury & Ain't Too Proud To Beg.

Your feedback for Made In The Shade