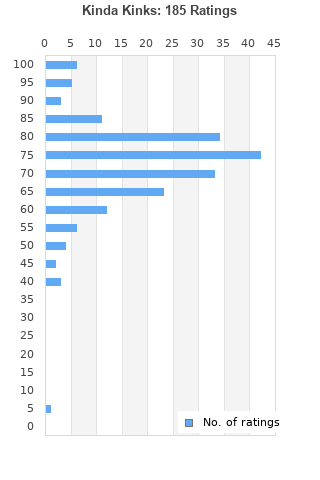 The Kinks-Kinda Kinks Vinyl / 12" Album NEW
Condition: New
Time left: 6h 38m 49s
Ships to: Worldwide
$33.72
Go to store
Product prices and availability are accurate as of the date indicated and are subject to change. Any price and availability information displayed on the linked website at the time of purchase will apply to the purchase of this product.  See full search results on eBay

Kinda Kinks is ranked 10th best out of 53 albums by The Kinks on BestEverAlbums.com.

The best album by The Kinks is The Kinks Are The Village Green Preservation Society which is ranked number 163 in the list of all-time albums with a total rank score of 11,098. 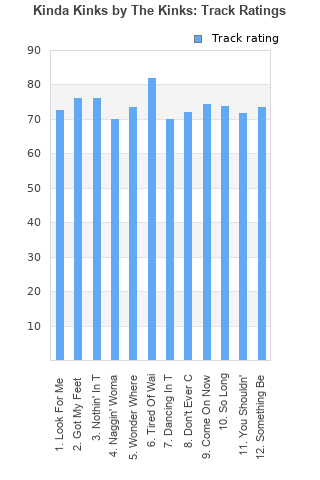 Rating metrics: Outliers can be removed when calculating a mean average to dampen the effects of ratings outside the normal distribution. This figure is provided as the trimmed mean. A high standard deviation can be legitimate, but can sometimes indicate 'gaming' is occurring. Consider a simplified example* of an item receiving ratings of 100, 50, & 0. The mean average rating would be 50. However, ratings of 55, 50 & 45 could also result in the same average. The second average might be more trusted because there is more consensus around a particular rating (a lower deviation).
(*In practice, some albums can have several thousand ratings)
This album has a Bayesian average rating of 74.1/100, a mean average of 73.7/100, and a trimmed mean (excluding outliers) of 74.2/100. The standard deviation for this album is 11.0.

Average. Catchy, yeah, but poor vocals and dull melodies do this album no favours. Even the boys sound bored sometimes.

Overall better than their first album, not because that the songs are better but because the band sounds better. It lacks a really strong song as the first one tho.

Come on and So long are the best songs -IMO- just a little above the general level of the album. Tired of waiting maybe can be added to the best tracks list.

Kinda forgettable while at the same time a good effort for a brit R&B's 60s album.

The lightning quick follow up to their self titled debut album, Kinda kinks, picks up where that record left off. The LP features ten originals and two poor cover versions(naggin' woman, and, dancing in the street). Of the self penned tracks best are the acoustic, nothin' in the world, and classic single, tired of waiting for you. The rest is filler, nothing particularly good, although, so long, isn't too bad. It wasn't an album the Davies' were particularly happy with, Dave turns away from the camera on the record sleeve and Ray just looks embarrassed. The Kinks were a much better singles band than album band at this point. The best was definitely yet to come.

This album feels rushed. Not a good example of their early work.

An entire album full of nothing but filler (possibly with the exception of So Long). Good quality filler but still...

Your feedback for Kinda Kinks