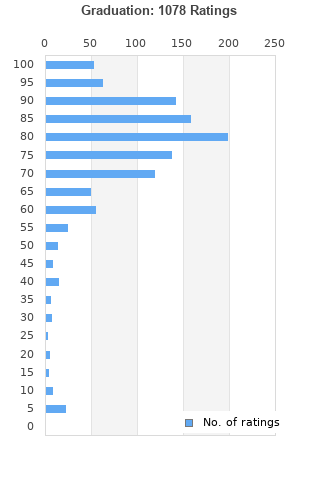 Graduation is ranked 6th best out of 14 albums by Kanye West on BestEverAlbums.com.

The best album by Kanye West is My Beautiful Dark Twisted Fantasy which is ranked number 32 in the list of all-time albums with a total rank score of 29,688. 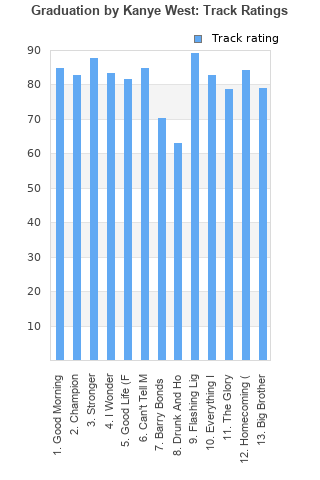 Rating metrics: Outliers can be removed when calculating a mean average to dampen the effects of ratings outside the normal distribution. This figure is provided as the trimmed mean. A high standard deviation can be legitimate, but can sometimes indicate 'gaming' is occurring. Consider a simplified example* of an item receiving ratings of 100, 50, & 0. The mean average rating would be 50. However, ratings of 55, 50 & 45 could also result in the same average. The second average might be more trusted because there is more consensus around a particular rating (a lower deviation).
(*In practice, some albums can have several thousand ratings)
This album is rated in the top 3% of all albums on BestEverAlbums.com. This album has a Bayesian average rating of 77.9/100, a mean average of 75.5/100, and a trimmed mean (excluding outliers) of 78.0/100. The standard deviation for this album is 18.3.

My eldest daughter is a Kanye devote and she tells me this is her favourite Yeezy album - not the best but favourite and thats a solid gold recommendation. For mine I was a little underwhelmed with this one but love love loved the layers of synth added to the mix which made the entire experience feel fresh and uplifting

In closing I’ll leave a quote from my daughter

“Dad, Graduation isn’t his best album but its the one he’ll be remembered for “

Yet another superb album. I used to think Kanye was all talk, but he is right - he is a genius. Again proving he is head and shoulders above anyone else in this genre. Drunk/Hot Girls is the only weak song on an album filled with great tunes. My favourites are Homecoming, Stronger, Everything I Am and Good Life.

Don't know why this is so much lower than the two other "Graduation" albums, it's more consistant imo. Barry Bonds is pretty bad, Drunk and hot girls as well, but "Flashing Lights", "Good Life" "Good Morning" "Stronger" "I Wonder" and my favourite "Homecoming" are great. Should be higher rated

This album does feel a bit weaker to his other releases around this time but the samples are still very good. There are some brilliant pop songs on here like Good Life, Stronger, Homecoming and Flashing Lights with all of them so easily getting stuck in your head. Other than these 3 and maybe one or two others I think the rest feels pretty filler and doesn't grab my attention. It feels a little more disjointed than his other albums and I don't think the music flows as well. It has definitely been more inspired by pop and so is a little more accessible but doesn't have that quality we are used to with Kanye. Overall, an album I never could get truly into and think there are far superior Kanye albums to listen to before you get to this one.

Kanye's most "poppy" album, which he pulls off quite well, to say the least.

Noticeably poppy for a hip-hop album, which is probably what I like about it. Also, no skits.

Your feedback for Graduation