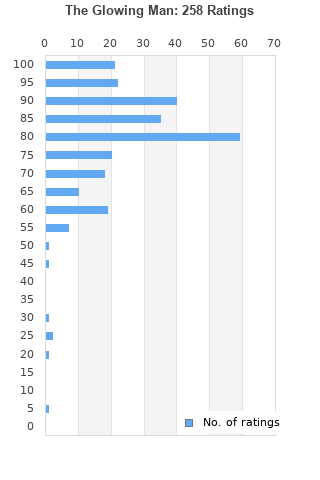 The Glowing Man is ranked 6th best out of 36 albums by Swans on BestEverAlbums.com.

The best album by Swans is To Be Kind which is ranked number 258 in the list of all-time albums with a total rank score of 7,384. 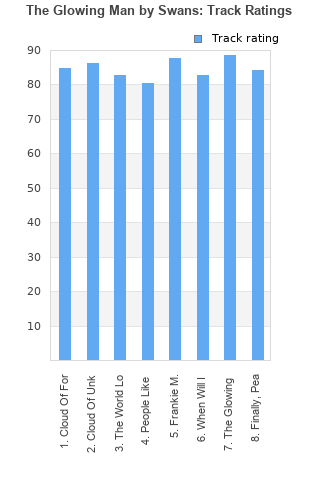 Rating metrics: Outliers can be removed when calculating a mean average to dampen the effects of ratings outside the normal distribution. This figure is provided as the trimmed mean. A high standard deviation can be legitimate, but can sometimes indicate 'gaming' is occurring. Consider a simplified example* of an item receiving ratings of 100, 50, & 0. The mean average rating would be 50. However, ratings of 55, 50 & 45 could also result in the same average. The second average might be more trusted because there is more consensus around a particular rating (a lower deviation).
(*In practice, some albums can have several thousand ratings)
This album is rated in the top 1% of all albums on BestEverAlbums.com. This album has a Bayesian average rating of 80.7/100, a mean average of 79.8/100, and a trimmed mean (excluding outliers) of 81.1/100. The standard deviation for this album is 14.8.

2016's The Glowing Man was intended to be the final stop for post-rock icons Swans. Even though it was not their final record, in many ways it feels like an ending, musically embodying a purifying crescendo. It's no secret that the band played their hand in a few false finishes in the past. 1996's Soundtracks for the Blind was a haunting, alluring attempt to combine Swans' music with a score to a film that did not exist. This also was planned to be the band's final musical epitaph. 2010 brought a new sound and a new Swans lineup and The Glowing Man was seen to be the concluding artistic flourish and what a flourish it turned out to be.

While the previous record, 2014's To Be Kind conveyed a seething, scathing critique of human indecency, The Glowing Man is a far more reflective and anguished experience, almost communicating that the emotional toll of the journey that this era of the band went through was a soul-altering odyssey. Take second track Cloud of Unknowing for instance, a 25 minute, bone-rattling lead up to a midpoint climax that I have yet to see duplicated. After the storm passes, the track slinks back into the bowels of darkness from which it was conceived, hissing chants of "Monster eater" and "Jesus feeler". The second half of the record commences with the towering Frankie M, a 20 minute pulse-pounding journey dedicated to a battle lost to drug addiction. An abridged version was featured in Swans' live sets as early as 2014 but the final form of the song serves as a moment of tempestuous strength and intense catharsis on the album. When Will I Return? details a horrifying rape-attempt that befell Michael Gira's wife Jennifer. Possibly the album's most gentile track, Jennifer claims to "Still kill him in her sleep". The penultimate track here is the title track, The Glowing Man. The most extensive cut on the album, clocking in at nearly 30 minutes, is the most chameleonic, beginning as an avalanche of bruising guitar hits. The track then simmers before swelling again into a furiously paced proclamation of bodily manifestation. Vocalist Michael Gira cries, "Joseph is moving his tongue in my neck, Joseph is riding a vein in my head, Joseph is cutting my arm on his bed, Joseph is making my body fly". After having listened to it, you'd be liable to admit to an out-of-body experience.

The Glowing Man only consists of eight tracks, eight tracks spanning nearly two hours with enough vexation, desperation and despair to rival a lifetime of alcoholic's anonymous meetings. I've stated in earlier write-ups that the band incorporates their music with a staunch focus on the dichotomy of sound decibles. The Glowing Man seems to consummate this idea with the concept of emotional contrast. Moments of exhilaration lap on the shores of severe hysteria and dejection. Additionally, It shines through in practice as well as from the listeners point of view. At times the album ceases to be organized sound, but instead formulates as a raw force of nature. Put simply, it sounds like a human soul crying out for liberation.

-When Will I Return?

It is the best record of the year.

It serves as a great conclusion to the trilogy, particularly in the last two songs. This record is sadder and more contemplative than the other two, seemingly settling the tension and anger found in the previous two records (respectively) with a sense of acceptance and giving up (until the finale). In a sense of lyricism and even emotional resolution, it serves as a great conclusion, however, based off the colors and intensity there is a case to be made that it should have been between the Seer and To Be Kind.

amazing ! best album of the year so far !

Like Saddler said to Leon: "You entertain me", this is my reaction to the new Swans leaked album.
Which is like To Be A Seer part two, expected Frankie M to be longer and Finally Peace to be more Nick Drake-like (like in The Gate).
But after all, this wasn't that bad.

Although the artwork/album colors suggest that this is a sequel to 'to be kind', it actually falls between the seer's long organic instrumentals and to be kind's abrasive guitars. This album is sadly the least in the series of these three albums. Best tracks: Frankie M., The Glowing Man.

Your feedback for The Glowing Man