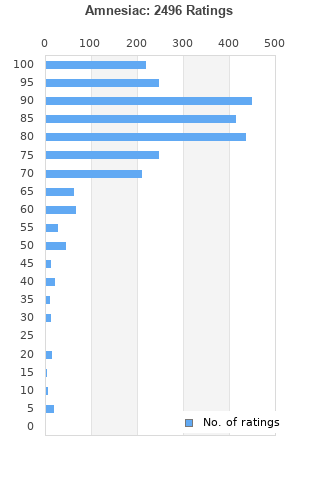 Amnesiac is ranked 6th best out of 22 albums by Radiohead on BestEverAlbums.com.

The best album by Radiohead is OK Computer which is ranked number 1 in the list of all-time albums with a total rank score of 89,702. 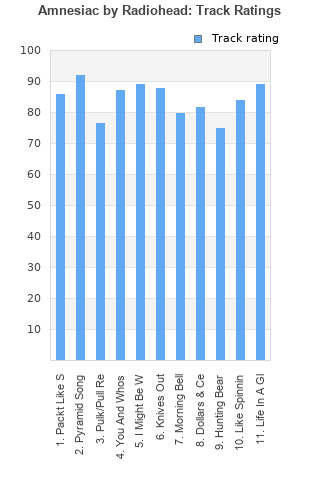 Rating metrics: Outliers can be removed when calculating a mean average to dampen the effects of ratings outside the normal distribution. This figure is provided as the trimmed mean. A high standard deviation can be legitimate, but can sometimes indicate 'gaming' is occurring. Consider a simplified example* of an item receiving ratings of 100, 50, & 0. The mean average rating would be 50. However, ratings of 55, 50 & 45 could also result in the same average. The second average might be more trusted because there is more consensus around a particular rating (a lower deviation).
(*In practice, some albums can have several thousand ratings)
This album is rated in the top 1% of all albums on BestEverAlbums.com. This album has a Bayesian average rating of 82.2/100, a mean average of 80.9/100, and a trimmed mean (excluding outliers) of 82.3/100. The standard deviation for this album is 15.4.

Hello and welcome to this 5 hour video essay where I'll go through why Amnesiac is actually Radiohead's best album.

So I bought the new kid amesiac record thing. I still think amnesiac is better than kid a. Sorry.

I do not really get hung on Radiohead..

Perhaps a bit sloppier than other albums by Radiohead. But Pyramid Song makes it a 95/100

Moments where I start to feel it.

They’re few and far between.

I really love some of the tracks on here - Pyramid Song; You And Whose Army; I Might Be Wrong; Life In A Glass House - but it's their first album for me that as a whole doesn't elevate into magic status

More Radiohead brilliance, although the album does suffer from Joshuatree-itis in that there is a huge drop-off from the first half to the second half. Highlights are Knives Out, You And Whose Army and I Might Be Wrong. Shame that the last 5 tracks drag the album down, otherwise I'd definitely be ranking this one higher.

Your feedback for Amnesiac