The Bends (studio album) by Radiohead 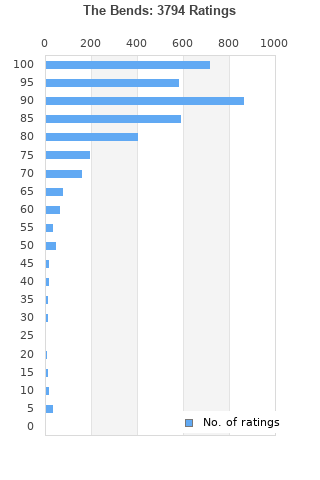 The Bends is ranked 4th best out of 22 albums by Radiohead on BestEverAlbums.com.

The best album by Radiohead is OK Computer which is ranked number 1 in the list of all-time albums with a total rank score of 92,471. 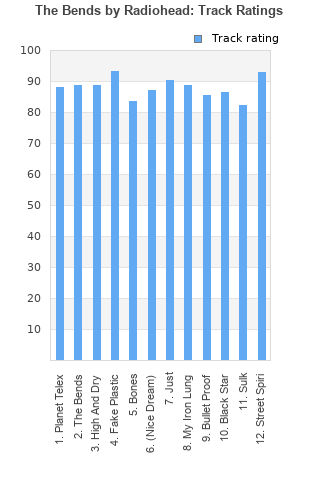 Rating metrics: Outliers can be removed when calculating a mean average to dampen the effects of ratings outside the normal distribution. This figure is provided as the trimmed mean. A high standard deviation can be legitimate, but can sometimes indicate 'gaming' is occurring. Consider a simplified example* of an item receiving ratings of 100, 50, & 0. The mean average rating would be 50. However, ratings of 55, 50 & 45 could also result in the same average. The second average might be more trusted because there is more consensus around a particular rating (a lower deviation).
(*In practice, some albums can have several thousand ratings)
This album is rated in the top 1% of all albums on BestEverAlbums.com. This album has a Bayesian average rating of 87.3/100, a mean average of 85.8/100, and a trimmed mean (excluding outliers) of 87.4/100. The standard deviation for this album is 15.2.

A strong sophomore effort from the one and only Radiohead, The Bends see the group improve leaps and bounds from their debut. With the emotional, heavy sounds of the mid-90's grunge and the deep sensitivity that really makes the band distinct, The Bends can be called the first true Radiohead album. From the powerful opening of Planet Telex, the reflective Fake Plastic Trees, to the magnificent closer of Street Spirit (Fade Out), there is a lot to be said on this album. Even the deep cuts like (Nice Dream) and Bullet Proof... I Wish I Was are incredibly strong tracks. Every band out there aspires to make an album as sonically wondrous and as massive of a technical achievement as The Bends.

The start of Radiohead's steep and remarkable rise to immortal status. What makes The Bends so incredible is that it has great qualities of an art-rock album while being able to stand amongst brit-pop and alternative rock albums of the time. The standard and class of writing here however puts this album way above those.

This album is the soundtrack to depression along with The Smiths- Queen is Dead. It's a very sad album and I don't listen to it much anymore because I'm a very happy person. However, the music is awesome and well written. It has a nostalgic vibes to it in some ways. Probably reminds people of the era in which it came out. I think it does deserve the hype and place that it reached. My only complaint is I wish Thom wrote happier songs. I would relate to it more.

What an album. There are no weak tracks on this, every single one is a delight. My favourites are Planet Telex and Nice Dream, but if you ask me again in a years' time, I'd probably name two different tracks as there are so many to choose from. That's the sign of an incredible album.

Brilliant. Points to what is to come in OK Computer, but still a great record in its own right. Bullet Proof is a bit of a weak link, but that’s nitpicking.

This record has been kind of lost in the brilliance that followed it, but The Bends is still a remarkable album, front to back. If you're coming to this from later Radiohead material, it may not speak to you at first. However, underneath the experimentation that surrounds what the band would soon be, lies another terrific offering from one of the best to ever record.

Your feedback for The Bends