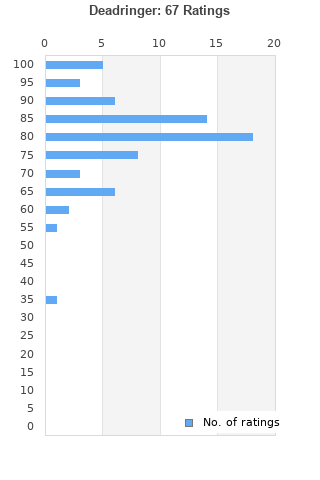 Deadringer is ranked as the best album by RJD2. 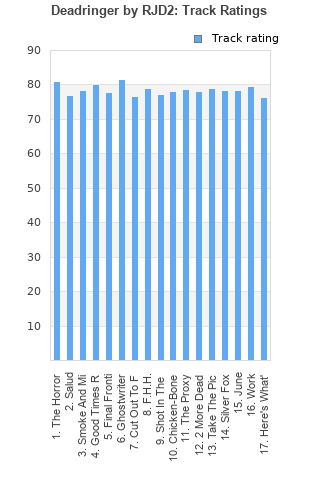 Outliers can be removed when calculating a mean average to dampen the effects of ratings outside the normal distribution. This figure is provided as the trimmed mean. A high standard deviation can be legitimate, but can sometimes indicate 'gaming' is occurring. Consider a simplified example* of an item receiving ratings of 100, 50, & 0. The mean average rating would be 50. However, ratings of 55, 50 & 45 could also result in the same average. The second average might be more trusted because there is more consensus around a particular rating (a lower deviation).
(*In practice, some albums can have several thousand ratings)
This album is rated in the top 2% of albums on BestEverAlbums.com. This album has a mean average rating of 81.0/100. The trimmed mean (excluding outliers) is 82.0/100. The standard deviation for this album is 12.0.

Often classified as an instrumental hip hop album, Deadringer feels to me like a fully realized artistic achievement compared, say, to something DJ Shadow might make. There's a surprising amount of emotional range here, and the fragments of samples that make up the album feel like they were always meant to be together. "Ghostwriter," with its light, shimmering guitar work, alternating samples of 'mmms' and 'ahhs,' and chorus of triumphant horns, recalls the joyful loopiness that defined the best psychedelic pop of the mid-1960s. The song's final joyful burst is so sublime that it alone justifies owning this album and listening to it with regularity. Honestly, this album felt so familiar to me right away that I can barely remember hearing it for the first time.

Your feedback for Deadringer