On The Border (studio album) by Eagles 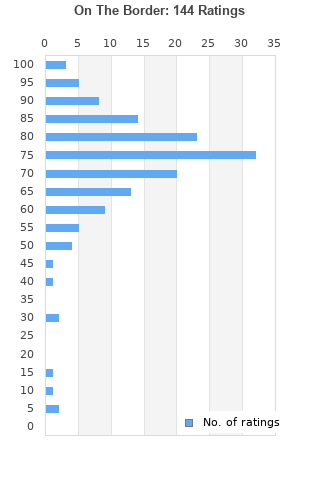 Eagles On The Border In Good Vintage Condition With Reasonable Wear Vinyl
Condition: Used
Time left: 1h 30m 22s
Ships to: Worldwide
$6.00
Go to store
Product prices and availability are accurate as of the date indicated and are subject to change. Any price and availability information displayed on the linked website at the time of purchase will apply to the purchase of this product.  See full search results on eBay

On The Border is ranked 7th best out of 17 albums by Eagles on BestEverAlbums.com.

The best album by Eagles is Hotel California which is ranked number 258 in the list of all-time albums with a total rank score of 7,689. 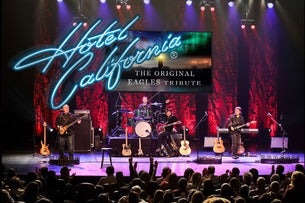 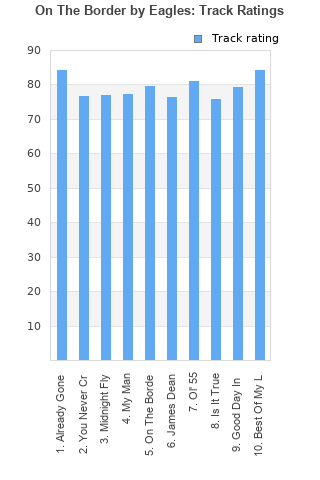 On The Border rankings

On The Border collection

On The Border ratings

Rating metrics: Outliers can be removed when calculating a mean average to dampen the effects of ratings outside the normal distribution. This figure is provided as the trimmed mean. A high standard deviation can be legitimate, but can sometimes indicate 'gaming' is occurring. Consider a simplified example* of an item receiving ratings of 100, 50, & 0. The mean average rating would be 50. However, ratings of 55, 50 & 45 could also result in the same average. The second average might be more trusted because there is more consensus around a particular rating (a lower deviation).
(*In practice, some albums can have several thousand ratings)
This album has a Bayesian average rating of 73.4/100, a mean average of 71.8/100, and a trimmed mean (excluding outliers) of 73.5/100. The standard deviation for this album is 15.7.

On The Border favourites

On The Border comments

An excellent Eagles album and unlike later efforts which were dominated by Henley this is a group recording. Glenn Fry provides some excellent guitar here with Felder only contributing to a couple tracks. Highlights.. On the Border, Ol 55, James Dean, and Already Gone. Best of My Love is a good one but overplayed.

Not quite as good as the first two, or the two that would follow it, but still perfectly pleasing to early Eagles fans.

Very underrated album, and in my opinion, second best by the Eagles after Hotel California. From the funky On the Border, to the bouncy Midnight Flyer, to the slide guitar-infused Good Day to Hell, to the sweet tribute My Man, everything on this album just works. Any fan of the Eagles or Eagles-like sound needs to listen to this one.

This to me should be right up there with Hotel California & Desperado as one of their best albums Already Gone, My Man a cover of Ol' 55 & Is It True are great tracks and Best Of My Love finishes of a really good collection of songs the only weakness the throw away Midnight Flyer.

Possibly my favourite Eagles album. On the border, features some excellent tracks. Already gone, is a great opener, the Gram Parsons tribute, my man, is utterly beautiful, and there's a nice cover of Tom Waits' ol'55. James Dean, is probably the weakest song, a generic rocker, but the rest is fine. Enjoyable record.

This is believe their weakest record. A few good tracks but generally uninspired.

Already Gone is the best song ever made with cheesy lyrics. Best of My Love, Ol' 55, and the title track are all classics as well.

Your feedback for On The Border