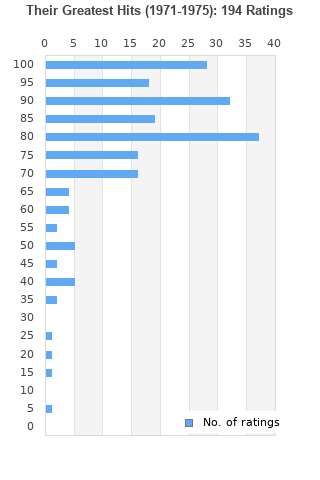 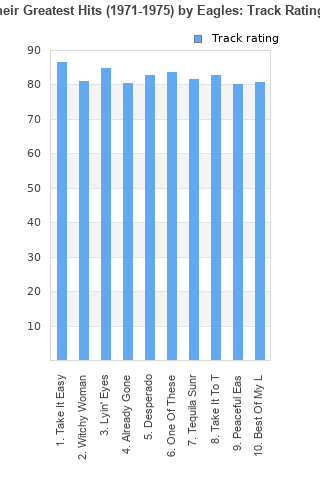 Rating metrics: Outliers can be removed when calculating a mean average to dampen the effects of ratings outside the normal distribution. This figure is provided as the trimmed mean. A high standard deviation can be legitimate, but can sometimes indicate 'gaming' is occurring. Consider a simplified example* of an item receiving ratings of 100, 50, & 0. The mean average rating would be 50. However, ratings of 55, 50 & 45 could also result in the same average. The second average might be more trusted because there is more consensus around a particular rating (a lower deviation).
(*In practice, some albums can have several thousand ratings)
This album is rated in the top 1% of all albums on BestEverAlbums.com. This album has a Bayesian average rating of 81.1/100, a mean average of 80.5/100, and a trimmed mean (excluding outliers) of 81.5/100. The standard deviation for this album is 17.2.

This was only popular in America, didn't get to No. 1 anywhere else. In fact the Eagles had six bigger selling albums in the UK alone, It's called their greatest hits but only three songs from this album hit the top 100.

It’s a great album. But the thing I don’t get. Is that Thiller has been in the billboard top 200 album chart. For about a hundred weeks longer then. This album. Don’t see how it can be. Tops even in the USA

I said to myself "I don't know anyone that owns this album, how can it be the best seller of all time in the US?" Looked through my dad's CD collection and there it was

Guys, this is not the best selling album of all time, Thriller is. Their Greatest Hits is the best seller in USA only.

@blueandthemoon only in US. Worldwide is still Thriller by Michael Jackson.

I guess it's not surprising that the all time best seller is a greatest hits compilation. It is, however, a little surprising that it's the Eagles. They had just the right mix of singles at the right time to launch this one to the very top, where it still remains, decades later.

How strange that this is the best selling album of all-time...