In The City (studio album) by The Jam 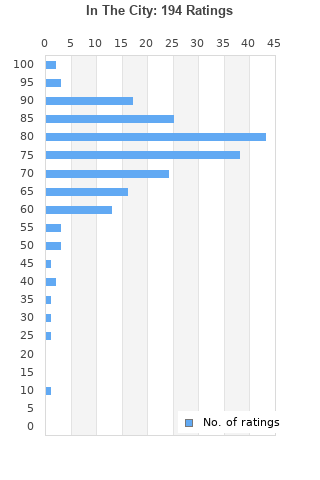 The Jam - All Around The World 1st Pressing Single Vinyl 7" Mod Punk 1977 Ex Con
Condition: Used
Time left: 2h 37m 13s
Ships to: Worldwide
£2.99
Go to store
Product prices and availability are accurate as of the date indicated and are subject to change. Any price and availability information displayed on the linked website at the time of purchase will apply to the purchase of this product.  See full search results on eBay

In The City is ranked 4th best out of 19 albums by The Jam on BestEverAlbums.com.

The best album by The Jam is All Mod Cons which is ranked number 656 in the list of all-time albums with a total rank score of 2,917. 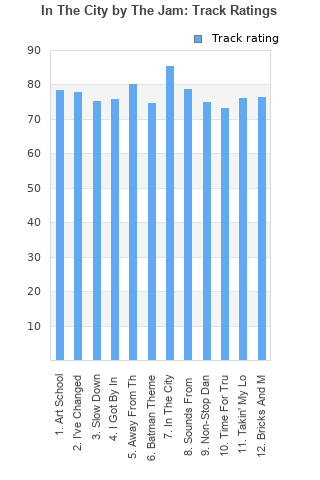 In The City rankings

In The City collection

In The City ratings

Rating metrics: Outliers can be removed when calculating a mean average to dampen the effects of ratings outside the normal distribution. This figure is provided as the trimmed mean. A high standard deviation can be legitimate, but can sometimes indicate 'gaming' is occurring. Consider a simplified example* of an item receiving ratings of 100, 50, & 0. The mean average rating would be 50. However, ratings of 55, 50 & 45 could also result in the same average. The second average might be more trusted because there is more consensus around a particular rating (a lower deviation).
(*In practice, some albums can have several thousand ratings)
This album is rated in the top 10% of all albums on BestEverAlbums.com. This album has a Bayesian average rating of 75.7/100, a mean average of 74.8/100, and a trimmed mean (excluding outliers) of 75.8/100. The standard deviation for this album is 13.4.

In The City favourites

In The City comments

Best Tracks: Away from the Numbers, Art School

Just one of those near-perfect punk albums from the right time and right place. Every track is instantly lovable, even the completely idiotic Batman cover.

"In The City" is the clear crowning jewel here.

The Jam's debut album is an energetic record full of rock and soul and a huge Who influence. In the city, displays Paul Weller's influences loudly and proudly. It's clear even from this early record that Weller is a huge talent who's going to be around for a while. I've changed my address, is a great track, as is, away from the numbers(probably the LP's most Who sounding cut), and, non-stop dancing. There's an enjoyable version of, slow down, and there's even a take on the theme from Barman, just like The Who did just over a decade before. All in all, a good start, but the best was yet to come.

First listen in ages. Sounds bloody great. Seeing them live at this time must have been an experience.

Energy, fire and skill. What makes it great to me, or rather, confirms it is that every one I spoke to when it came out had a different favourite track.

A good album with plenty of energy. Weller's songwriting was still to develop more.

A GREAT DEBUT ALBUM...BUT I FEEL THEY GOT BETTER...STILL "I'VE CHANGED MY ADDRESS" AND "I GOT BY IN TIME" ARE HEARTFELT CLASSICS... OTHER FAVS:"NON STOP DANCING","ART SCHOOL","AWAY FROM THE #'S" AND THE TITLE TRACK

Fast and furious with edge and punch. Amazing drumming and slick guitar work by Weller. The best Jam album in my opinion.

Tracks like Art School and In The City mean a lot to me. Bes album by The Jam in my opinion.

Your feedback for In The City