Attack Of The Grey Lantern (studio album) by Mansun 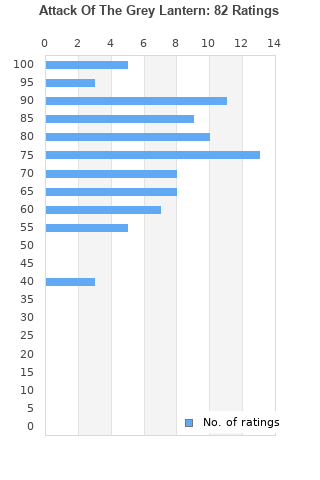 Attack Of The Grey Lantern is ranked as the best album by Mansun.

Listen to Attack Of The Grey Lantern on YouTube 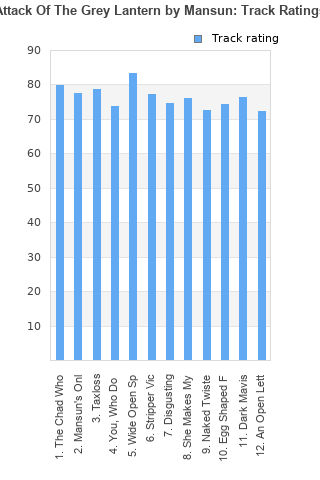 Attack Of The Grey Lantern rankings

Attack Of The Grey Lantern collection

Attack Of The Grey Lantern ratings

Rating metrics: Outliers can be removed when calculating a mean average to dampen the effects of ratings outside the normal distribution. This figure is provided as the trimmed mean. A high standard deviation can be legitimate, but can sometimes indicate 'gaming' is occurring. Consider a simplified example* of an item receiving ratings of 100, 50, & 0. The mean average rating would be 50. However, ratings of 55, 50 & 45 could also result in the same average. The second average might be more trusted because there is more consensus around a particular rating (a lower deviation).
(*In practice, some albums can have several thousand ratings)
This album is rated in the top 6% of all albums on BestEverAlbums.com. This album has a Bayesian average rating of 76.4/100, a mean average of 76.9/100, and a trimmed mean (excluding outliers) of 76.9/100. The standard deviation for this album is 13.5.

Attack Of The Grey Lantern favourites

Attack Of The Grey Lantern comments

Solid all the way through but 'Wide Open Space' and 'Disgusting' are probably a step or two above the rest of the songs.

Apparently this album was pretty much already done when Radiohead was only getting started in recording their most seminal stuff - which is pretty interesting stuff in my book.

" All that arty farty bollox about "interpret it as you will" is baloney from phonies. That just means they can't justify what they are writing. "

Well said and couldn't agree more. I do feel certain kinship to this fella for sure.

Mansun is a cosmic example in how a band that could very well have become one of the great ones is ruined largely because of lack of promotion (and general faith), bad management and having a band member who turns out to be somewhat of a sociopath who decides to steal the band's money.

Granted, it didn't exactly help to put out a record like "Six" quite so soon (if at all). Alienating your fans and more importantly potential fans by your own devices is pretty much the same as not really wanting to succeed in the music business.

Be that as it may, there's a Hollywood movie right there. Just saying.

I bet we haven't heard the last of Mr. Draper, though - not by a long shot.

Attack of the Grey Lantern? The attack of the Grey Lantern!? What is that? Am I alone imagining a small hooded figure walking the side of Ullswater in the dark early hours. Luring unexpecting souls off the path with her lantern before giving them a messy end at her hand with some shiny knives. So just what do we have hear anyway? A cult classic, now corroded in status, pushed the top of charts by over zealous fans? The missing link between Suede and Manic Street Preachers? Well you're almost half way there... not quite the 50% you were hoping I know. 'Taxloss' has the vibe of a hidden Stones Roses number... but doesn't really sound like a song by them. 'Stripper Vicar'... that title reminds me of 'Vicar In A Tutu'. So The Smiths maybe? Both it and Taxloss have an angst strain coupled with criticism of Her Majesties institutions. Morrissey can get behind that! And the guitars sound a little jangly. In some parts anyway... 'She Makes My Nose Bleed' has an icy bombast of drums while The Chad Who Loved Me has a dreamy wistful sound. That one is the musical equivalent to looking at cloudy lemonade. Sounds bad but it works. So a quiet Slowdive? A bit of Lush on the side? That singer sure sounds like he could sing for Placebo on 'Wide Open Space'. You know what? Forget all those bands, this is Mansun. There was little like these chaps and there won't be another anytime soon. You see, these guys are finished they split. Into the abyss of time. Pass them on in your legends along with the Grey Lantern. And while you're at it... give them a listen.

Your feedback for Attack Of The Grey Lantern