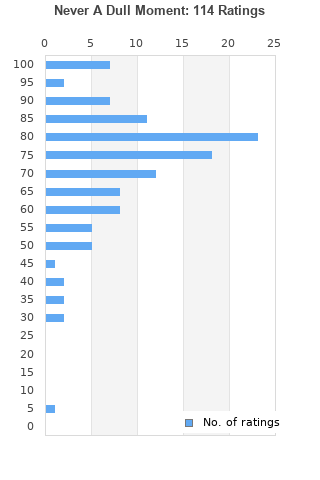 rod stewart never a dull moment cd
Condition: Very Good
Time left: 3h 34m 52s
Ships to: Worldwide
$7.99
Go to store
Product prices and availability are accurate as of the date indicated and are subject to change. Any price and availability information displayed on the linked website at the time of purchase will apply to the purchase of this product.  See full search results on eBay

Never A Dull Moment is ranked 4th best out of 45 albums by Rod Stewart on BestEverAlbums.com.

The best album by Rod Stewart is Every Picture Tells A Story which is ranked number 1031 in the list of all-time albums with a total rank score of 1,808. 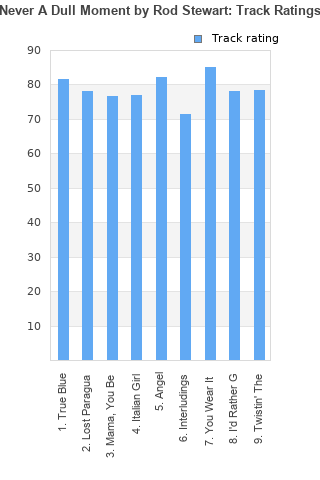 Rating metrics: Outliers can be removed when calculating a mean average to dampen the effects of ratings outside the normal distribution. This figure is provided as the trimmed mean. A high standard deviation can be legitimate, but can sometimes indicate 'gaming' is occurring. Consider a simplified example* of an item receiving ratings of 100, 50, & 0. The mean average rating would be 50. However, ratings of 55, 50 & 45 could also result in the same average. The second average might be more trusted because there is more consensus around a particular rating (a lower deviation).
(*In practice, some albums can have several thousand ratings)
This album has a Bayesian average rating of 73.0/100, a mean average of 72.3/100, and a trimmed mean (excluding outliers) of 73.0/100. The standard deviation for this album is 17.2.

The last top draw Rod Stewart album. Never a dull moment, basically completes the first phase of Stewart's career. Some people may stretch it as far as, smiler, but for me it ends here. Mama, you've been on my mind, Angel, and, you wear it well, are the standout tracks. Good

My second favorite Rod Stewart record. He had such an unique voice. It's a shame he turned into a corporate machine.

This the follow up to Every Picture isn't as good as its famous predecessor. But it is a good album sounds a little rushed though maybe because it was the 7th album Rod/The Faces had released in the last 3 years (1969-72). The stand out tracks are Jimi Hendrix tribute Angel & the brilliant You Wear It Well. Mama You Been Om My Mind, True Blue & Los Paraguayos are also right up there. What Made Milwaukee Famous was also supposed to be on the album but for some reason was onlt released as a single.

Best Track: You Wear It Well

My second most played Rod album behind 'Night On The Town' although this holds my favourite track of his in 'You Wear It Well' a great little record this shame its only 33mins long, other faves here 'Lost Paraguoyos,True Blue,Twisting The Night Aaway'.

Your feedback for Never A Dull Moment