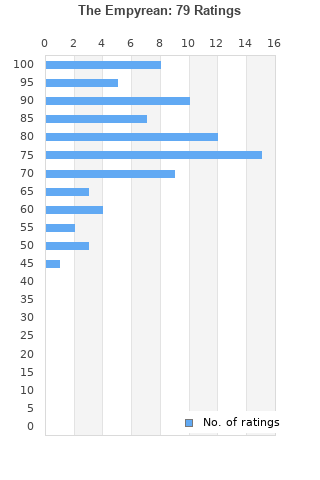 NEW SEALED 2019 John Frusciante The Empyrean Vinyl LP 10 Year Anniversary
Condition: New
Time left: 2d 14h 4m 33s
Ships to: Worldwide
$90.00
Go to store
Product prices and availability are accurate as of the date indicated and are subject to change. Any price and availability information displayed on the linked website at the time of purchase will apply to the purchase of this product.  See full search results on eBay

The Empyrean is ranked 4th best out of 16 albums by John Frusciante on BestEverAlbums.com.

The best album by John Frusciante is Shadows Collide With People which is ranked number 2320 in the list of all-time albums with a total rank score of 688. 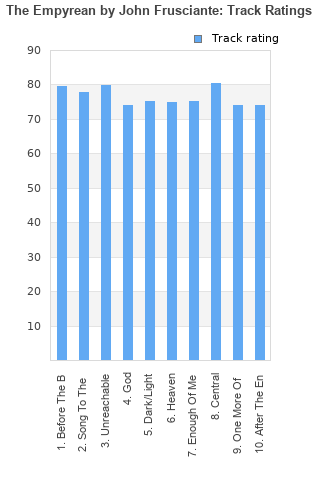 Rating metrics: Outliers can be removed when calculating a mean average to dampen the effects of ratings outside the normal distribution. This figure is provided as the trimmed mean. A high standard deviation can be legitimate, but can sometimes indicate 'gaming' is occurring. Consider a simplified example* of an item receiving ratings of 100, 50, & 0. The mean average rating would be 50. However, ratings of 55, 50 & 45 could also result in the same average. The second average might be more trusted because there is more consensus around a particular rating (a lower deviation).
(*In practice, some albums can have several thousand ratings)
This album is rated in the top 3% of all albums on BestEverAlbums.com. This album has a Bayesian average rating of 78.4/100, a mean average of 79.1/100, and a trimmed mean (excluding outliers) of 79.1/100. The standard deviation for this album is 13.8.

An album to be listened to in the dark. That's what John says about this. He's right.

This is a fantastic work of art. Starting with the wonderful rework of 'Maggot Brain' by Funkadelic and the Tim Buckley cover the album gets better and better. With Central acting as the magnificant bridge that allows you to cross from the first half to the second half of the album. A bridge I recommend all to cross.

Quite liked this on first listen.

Signature guitar sounds. and bluesy, downbeat lyrics and sound, (which is fine by me)

This album is my kind of shit. Oddly enough, One Hot Minute has always been my favorite RHCP album, but Frusciante has always been my favorite member of the Peppers. Figure that one out. Well, he brings it hard on this album. Unreachable is a such a beautiful track. Central is just as good, and he brings a Vedderesque level of passion to the song. Obviously the guitar work is off the chart as well. Check out the track Dark/Light. While it may go on a bit long for some, I think every second of this track up to its sudden end is important. Shades of King Crimson all over the place, and if Frusciante really is doing the bass like the liner notes claim, he does the best Flea impression ever. The only downside of the album is that his vocals can get into the Phil Collins territory at times, but that's a minor problem. Check out this album right away. I really miss this guy already.

Your feedback for The Empyrean