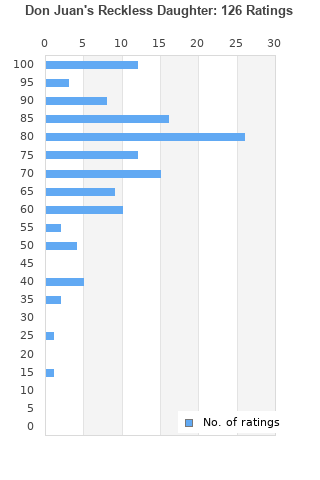 Don Juan's Reckless Daughter by Joni Mitchell (CD, Mar-2000, Elektra (Label))
Condition: Like New
Time left: 9h 8m 11s
Ships to: Worldwide
$5.10
Go to store
Product prices and availability are accurate as of the date indicated and are subject to change. Any price and availability information displayed on the linked website at the time of purchase will apply to the purchase of this product.  See full search results on eBay

Don Juan's Reckless Daughter is ranked 9th best out of 31 albums by Joni Mitchell on BestEverAlbums.com.

The best album by Joni Mitchell is Blue which is ranked number 77 in the list of all-time albums with a total rank score of 19,143. 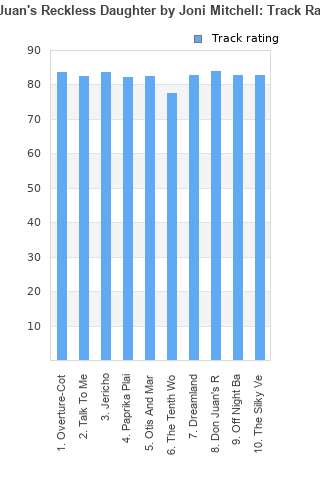 Rating metrics: Outliers can be removed when calculating a mean average to dampen the effects of ratings outside the normal distribution. This figure is provided as the trimmed mean. A high standard deviation can be legitimate, but can sometimes indicate 'gaming' is occurring. Consider a simplified example* of an item receiving ratings of 100, 50, & 0. The mean average rating would be 50. However, ratings of 55, 50 & 45 could also result in the same average. The second average might be more trusted because there is more consensus around a particular rating (a lower deviation).
(*In practice, some albums can have several thousand ratings)
This album has a Bayesian average rating of 74.2/100, a mean average of 73.7/100, and a trimmed mean (excluding outliers) of 74.2/100. The standard deviation for this album is 16.4.

I love how free the songs sound, it's crazy to compare this album with Blue.

Definitely a good album, it takes five to six listens before you start to appreciate it. I like all the tracks apart from THE TENTH WORLD. The title track is up their with her best songs.

Dream on and Cotton Avenue are great. But the rest sounds like she's pretty much abandoned melody all together. Sorry but for me Paprika Plains is a huge bore as are all of Mitchell's forays into orchestration. Hejira was clearly her peak and now she starts her gradual descent. Happens even to the greats.

This album conforms to nothing Joni's done up to this point in her career. It's free.

Another great record by an often misunderstood and derided songstress. She was moving past pretty music into the realm of experimentation. You have to give her credit for that even is you don't understand what she is doing.

Some love this, some don't. I'm ambivalent to Joni's mid to late 70s work. It can be an effort, but often, it's worth it.

hairymarx1..you are so eloquent...Love all of her albums, i have been listening to "song for a seagull" lately, "Cactus Tree' is such a great song, this version especially, she is so young when she sang this and her voice is so light and supple. As she matured, it turned smokey and darker which worked well for the material but something about this album really moves me...many people think it is too sophomoric but I disagree.

i agree with you.I completely love this album...

'Don Juan's Reckless Daughter' is probably the most underrated of all the recordings in rock history. It is a piece that in its totality is a mature work of beauty that works on every emotional and intellectual level. Above all else the encapsulation of the synergy between music and poetry is unsurpassed.

The strident symphonic overtones that embelish 'Paprika Plains' is a work of eloquence and restraint - a wonderous piece that evokes a time and a place which appear suspended and disclocated from gravity. Dream-like abstractions and mysticism is a running theme throughout the album. This is a work that rewards the attentive listener with un-ending pleasure - a timeless masterpiece.