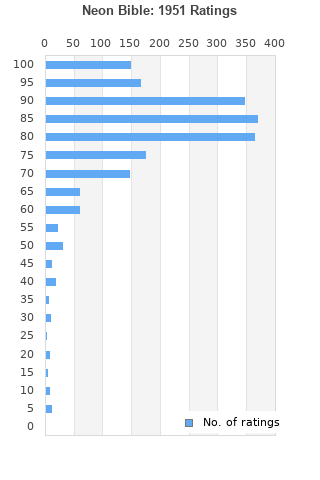 Neon Bible is ranked 3rd best out of 7 albums by Arcade Fire on BestEverAlbums.com.

The best album by Arcade Fire is Funeral which is ranked number 13 in the list of all-time albums with a total rank score of 50,605. 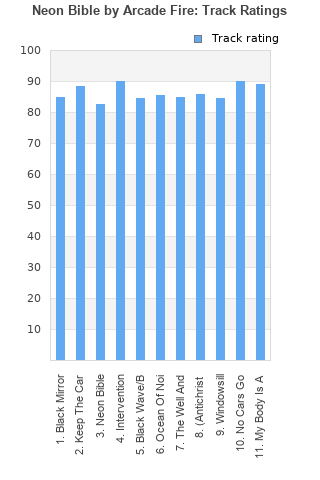 Rating metrics: Outliers can be removed when calculating a mean average to dampen the effects of ratings outside the normal distribution. This figure is provided as the trimmed mean. A high standard deviation can be legitimate, but can sometimes indicate 'gaming' is occurring. Consider a simplified example* of an item receiving ratings of 100, 50, & 0. The mean average rating would be 50. However, ratings of 55, 50 & 45 could also result in the same average. The second average might be more trusted because there is more consensus around a particular rating (a lower deviation).
(*In practice, some albums can have several thousand ratings)
This album is rated in the top 1% of all albums on BestEverAlbums.com. This album has a Bayesian average rating of 81.9/100, a mean average of 80.5/100, and a trimmed mean (excluding outliers) of 81.9/100. The standard deviation for this album is 15.4.

Can't deny they're talented but there's something about them that I just find cringey. Something about introverts trying to be Springsteen.. Their 'fragile male voice singing rousing anthems' formula clearly caught on and was probably responsible for a lot of crap in pop music the following years. Also, if it weren't for the rich arrangements many of these songs would be unremarkable.

I really liked Funeral, but this one didn't do it for me. I don't understand the hype around this album. I do really like Keep The Car Running though. No Cars Go and Windowsill are nice too.

They took everything about Funeral and improved upon it. Those last two tracks are amazing.

Arcade Fire are just the masters of Indie Rock Music. After listening to and loving Funeral and The Suburbs, I was introduced to this album and I love it just as much. This album can definitely hold its own with the other two and have some amazing stand out high moments. One being my favourite track which is Intervention. The level of quality on display is amazing, the instrumentation is beautiful and the vocals match this perfectly. This album is incredible and 100% worth a listen if you have never heard it before.

It's.... fine I guess. Probably the most "indie rock" of indie rock I ever heard. I prefer The Suburbs and Funeral but this is still great. Arcade Fire is a hard band to listen to IMO.

The presence of Intervention would be enough to classify this album as great, but the rest is not too bad either.

Your feedback for Neon Bible