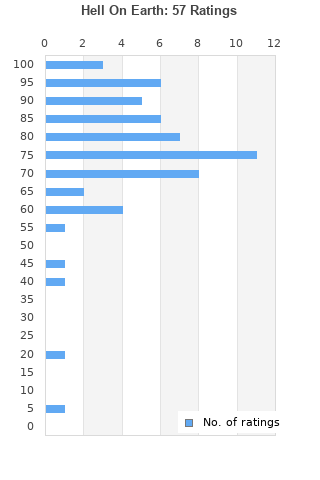 Hell On Earth is ranked 2nd best out of 8 albums by Mobb Deep on BestEverAlbums.com.

The best album by Mobb Deep is The Infamous... which is ranked number 656 in the list of all-time albums with a total rank score of 2,837. 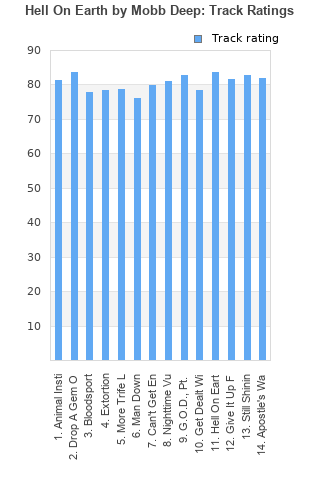 Rating metrics: Outliers can be removed when calculating a mean average to dampen the effects of ratings outside the normal distribution. This figure is provided as the trimmed mean. A high standard deviation can be legitimate, but can sometimes indicate 'gaming' is occurring. Consider a simplified example* of an item receiving ratings of 100, 50, & 0. The mean average rating would be 50. However, ratings of 55, 50 & 45 could also result in the same average. The second average might be more trusted because there is more consensus around a particular rating (a lower deviation).
(*In practice, some albums can have several thousand ratings)
This album is rated in the top 4% of all albums on BestEverAlbums.com. This album has a Bayesian average rating of 77.1/100, a mean average of 75.5/100, and a trimmed mean (excluding outliers) of 77.9/100. The standard deviation for this album is 17.9.

This has to be the most underrated album on this site. Just as good as Infamous.

Proper proper old school hip hop. RIP Prodigy. This is something that's a little bit more unrefined compared to it's successor but there's still some hard hitters. Shook Ones pt.1 might be as good as pt.2 if not on the same level - as ever, the grimy, dark beats created by Havoc (what a master creator) really set the tone and everything P spits seems so natural. It gives a humbling, terrifying, incredible insight into the wild life of African Americans, and the Mobb members in NYC in the 90s, a life revolving around crime. I think creatively and sonically it is a little more simplistic but remains rather enjoyable.

Your feedback for Hell On Earth