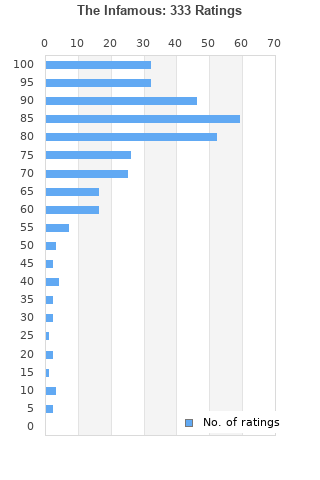 The Infamous... is ranked as the best album by Mobb Deep. 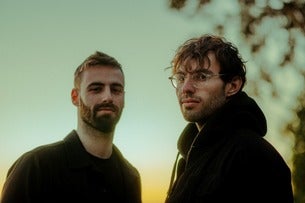 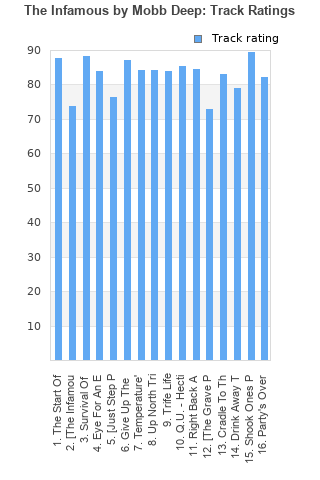 Survival Of The Fittest
Rating: 88 (83 votes)Comments:

Rating metrics: Outliers can be removed when calculating a mean average to dampen the effects of ratings outside the normal distribution. This figure is provided as the trimmed mean. A high standard deviation can be legitimate, but can sometimes indicate 'gaming' is occurring. Consider a simplified example* of an item receiving ratings of 100, 50, & 0. The mean average rating would be 50. However, ratings of 55, 50 & 45 could also result in the same average. The second average might be more trusted because there is more consensus around a particular rating (a lower deviation).
(*In practice, some albums can have several thousand ratings)
This album is rated in the top 2% of all albums on BestEverAlbums.com. This album has a Bayesian average rating of 80.6/100, a mean average of 78.9/100, and a trimmed mean (excluding outliers) of 80.8/100. The standard deviation for this album is 17.6.

Wasn't expecting the Q-Tip influence or welcome Wu features, but this album is long and stays bleak for the duration.

Mobb Deep - The Infamous... is an album that belongs in the same category as Mos Def - Black on Both Sides in the sense that most people with an elementary knowledge of the history of the genre would perceive them as absolute classics, but the majority of casual listeners without much of a hip hop background wouldn't consider them as equal to the top albums(you all know which ones I mean) and might view them as a "second tier classic". Anyway, this has nothing to do with the album itself and by no means does it diminish its value. Its influence is undeniable, but its enjoyability isn't that far behind either. The production goes for a dark selection of beats that fit the content of the album. Also, I had the impression that some of the tracks had a "slow-burning" effect. They start off kinda ok and at some point you're getting really deep. However, I can't remember something similar happening in older listenings of this, so in all likelihood it has more to do with my mood right now and the fact that I am not paying 100% attention and when I focus I suddenly realise what I'm hearing. Rapping is not exactly the strong point of the album, but it has to be said that Prodigy has a more distinct and memorable delivery than Havoc. Despite the lyrics exploring typical themes of the street/gangsta life, their realistic and relatable approach makes them stand out. The Start of Your Ending (41st Side) introduces us to the problems they have to deal with as part of their daily routine ("Cock back the Gat then hit a nigga like a bid 25, nah, kid you gettin' life Forever burnin' in hell, niggas is trife"). [The Infamous Prelude] feels a bit too long, but it never gets to the point of becoming annoying. Survival Of The Fittest is a lesson on surviving in the streets ("There's a war goin' on outside no man is safe from You could run, but you can't hide forever From these streets that we done took You walkin' with your head down, scared to look You shook, ‘cause ain't no such things as halfway crooks They never around when the beef cooks in my part of town It's similar to Vietnam"). Eye for a Eye (Your Beef Is Mines) is a song that features Nas and Raekwon, so there's not much to be said, only that it contains one of my favorite quotes of the album due its surreal scenery ("Cause I wanna chill, laid up in a jacuzzi Sippin' bubbly with my fingers on the Uzi"). [Just Step Prelude] is clearly more effective than the previous prelude. Then comes a fantastic sequence of songs and in my opinion the strongest part of the album. The super smooth Give Up the Goods (Just Step) followed by the heavy Temperature's Rising, where the female vocals is the only chance to catch your breath, and Up North Trip with its extremely catchy hook. Trife Life is characterised by its exemplary storytelling ("OK, check it, you're on your way to your girl's crib But the bitch live in the Bridge You ain't really sweating it 'Cause little do you know, the niggas in the Bridge be setting it You thought you was safe And tried to walk the back streets without heat On the 41st Side of 12th Street The side where niggas don't give a fuck The side where if you come through fronting Kid, you getting bucked"). Q.U. -- Hectic is one of my least favorite songs of the album, it interrupts the hot streak. Right Back At You features again some A-list guests, namely Ghostface Killah and Raekwon. [The Grave Prelude] is another great prelude. Cradle to the Grave is the second piece of fine storytelling ("Kid, you ain't lyin' I went to stash the murder weapon, plus I'm relyin' On a door to be open, goin' in the building, it's a trap Police buckin' at me, they try to twist my dome back Jetted up the staircase to the third floor Reached behind the sink, throw the heater on the floor Locked the door, police grabbed me up and tried to break my jaw Said, "Where's the gun we saw? (I don't know) We know you was there at the homicide scene (I don't know nothin') And if it wasn't you, it was somebody from ya team"). I view Drink Away The Pain (Situations) as one of the weakest tracks, but it is saved by the sax. Shook Ones (Part II) is their most recognisable song and one of the rare occasions where part two is better than part one. Party's Over is a fitting closer.
To sum it up, its status as a classic is well deserved.

This is a defining act of East Coast hip-hop. A real unique take of the gangsta life, really coming into their own with super classy sampling, with properly refined narratives giving a clear insight into the life of these men. This is Mobb at their creative peak and they spin the tragedy and dangers of life so beautifully and tantalisingly, it's so hard not to get caught up in the entire atmosphere of life in these times. I really believe the idea that art (especially music) are expressions of the subconscious of society and culture at certain times, and this record absolutely personifies the hard-hitting, perilous lives people lived - this album is alive! Almost unbelievable, it's like a foreboding of a tragic hero, a man who had a fall from grace despite the incredible stories he told to paint a picture of a legendary scene and seeing men at different points, creating a legacy. I don't love every single track but a select few more than make up by being so damn good. This entire album, so damn good.

Crazy to think I only got started on the good East Coast shit after clicking on the music video for Shook Ones pt.2 by accident. No regrets.

Just when Hip-Hop was producer-heavy (or had P Diddy dancing in videos), Mobb Deep drops this simplistic yet cutting album.

R.I.P Prodigy. One of the best hip-hop albums from the 90s - and that says a lot!

I really wanted to like this because of its status as a classic, but I just don't hear what everyone else hears. The beats are great, very dark and threatening, but there's not enough variety to justify an hour run time. And Prodigy and Havoc have no stage presence whatsoever - I cannot remember a single line from this album. As for the subject matter: this gets a lot of credit for discussing the darker side of gang life, but I don't see what separates it from Illmstic or Ready To Die in terms of how "real" it sounds. In fact, I prefer Ready To Die with its whole "this life isn't great but it's my life and I like it" vibe. Plus Biggie is an interesting rapper...

So yeah, not terrible but too long and not memorable.

I'm not a big fan of gangsta but this is how it should be done. Bleak. Bit too bleak probably as I find this hard going to get through from start to finish as there is no let up in the mood. No chink of light getting in. Though Shook ones is quite probably in the top 20 or even 10 hip hop tracks ever. Stunning track right from the off.

Walking along the streets of New York with all your homies, until the night dims down, that's where all the madness starts to happen.

Straight up gangster. Lyrics are strong but the beats are super repetitive. It just all sounds the same.

Your feedback for The Infamous...