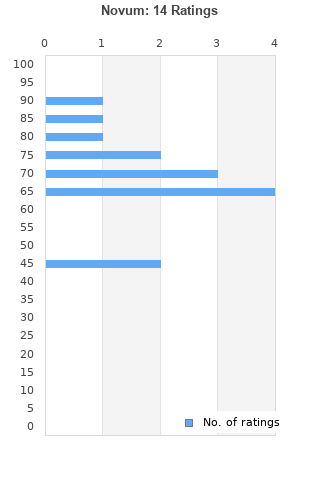 Procol Harum - Novum [New CD]
Condition: Brand New
Time left: 4d 2h 8m 54s
Ships to: Worldwide
$20.19
Go to store
Product prices and availability are accurate as of the date indicated and are subject to change. Any price and availability information displayed on the linked website at the time of purchase will apply to the purchase of this product.  See full search results on eBay

Novum is ranked 6th best out of 18 albums by Procol Harum on BestEverAlbums.com. 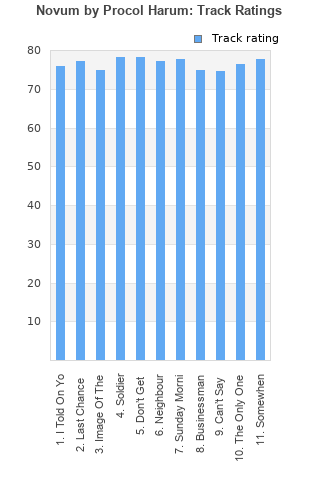 Rating metrics: Outliers can be removed when calculating a mean average to dampen the effects of ratings outside the normal distribution. This figure is provided as the trimmed mean. A high standard deviation can be legitimate, but can sometimes indicate 'gaming' is occurring. Consider a simplified example* of an item receiving ratings of 100, 50, & 0. The mean average rating would be 50. However, ratings of 55, 50 & 45 could also result in the same average. The second average might be more trusted because there is more consensus around a particular rating (a lower deviation).
(*In practice, some albums can have several thousand ratings)
This album has a Bayesian average rating of 71.8/100, a mean average of 70.5/100, and a trimmed mean (excluding outliers) of 70.5/100. The standard deviation for this album is 11.6.

Novum is a roaring return to form for Procol Harum (or, let's face it, Gary Brooker and his guests), being a massive improvement on the previous album, "The Well is on Fire".

This album starts with "I Told on You" and "Last Chance Motel", two very nice songs that set our standard for the album to come. Then we get the album's worst song, "Image of the Beast" which, while not bad, isn't very memorable. Then we get the albums best song, "Soldier" which has so much going for it and is followed by three more amazing songs "Don't Get Caught", "Neighbour" and "Sunday Morning". After this, we get "Business Man" and "Can't Say That", two more forgettable rock numbers, but we quickly return to form with "The Only One", a pleasant little track and the grand closer "Somewhen", also very nice.

Overall, this album is worth buying for any music fan, it may have a few (3) clunkers, but let's not forget so did 'A Salty Dog'.

Your feedback for Novum