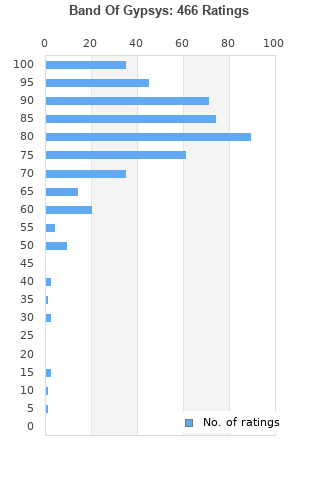 Jimi Hendrix, Band Of Gypsys 200g (New Profile) LP (Michael Hobson Archives)
Condition: New
Time left: 1h 55m 20s
Ships to: Worldwide
$101.00
Go to store
Product prices and availability are accurate as of the date indicated and are subject to change. Any price and availability information displayed on the linked website at the time of purchase will apply to the purchase of this product.  See full search results on eBay

Band Of Gypsys is ranked as the best album by Jimi Hendrix. 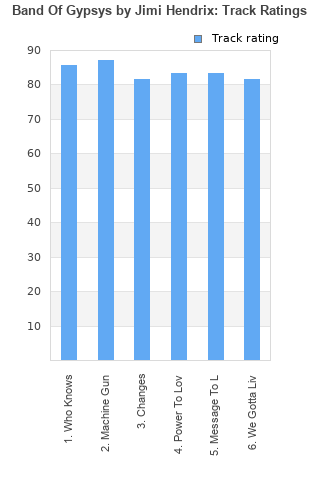 Rating metrics: Outliers can be removed when calculating a mean average to dampen the effects of ratings outside the normal distribution. This figure is provided as the trimmed mean. A high standard deviation can be legitimate, but can sometimes indicate 'gaming' is occurring. Consider a simplified example* of an item receiving ratings of 100, 50, & 0. The mean average rating would be 50. However, ratings of 55, 50 & 45 could also result in the same average. The second average might be more trusted because there is more consensus around a particular rating (a lower deviation).
(*In practice, some albums can have several thousand ratings)
This album is rated in the top 1% of albums on BestEverAlbums.com. This album has a mean average rating of 81.0/100. The trimmed mean (excluding outliers) is 81.8/100. The standard deviation for this album is 14.2.

Six good tracks on this live album,four of them writen by Jimi. Musically very strong, lyrically not as strong as previous output.

All 3 of Jimi's studio albums are considered Rock essentials, but if you're a guitarist, I would call this record just as important to hear. Whether you agree with it or not, Jimi is consistently cited as the greatest guitarist of all time, and he proves it on his solos here.

Good and interesting live document. It's great that Hendrix is happy to share the limelight and respect the idea of a band. Machine gun, is the highlight of this excellent album.

I think this is an album that even those who aren't into live albums can get into.

This album shows just how well Jimi could groove. Mitch Mitchell was a perfect compliment to Hendrix in the Experience, but Buddy Miles lays down a fat groove on every track here, and Hendrix digs right in.

Billy Cox is a fantastic bassist who goes well with Jimi, and Buddy Miles is pretty good but I think I still prefer Mitch Mitchell.

Sadly, the rest of the album doesn't live up to the first two tracks.

It has been said before, but it is certainly true. The sounds that Jimi Hendrix could get out of his guitar were just amazing.

Your feedback for Band Of Gypsys