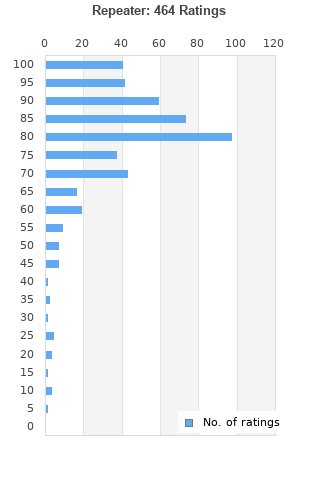 Repeater is ranked as the best album by Fugazi. 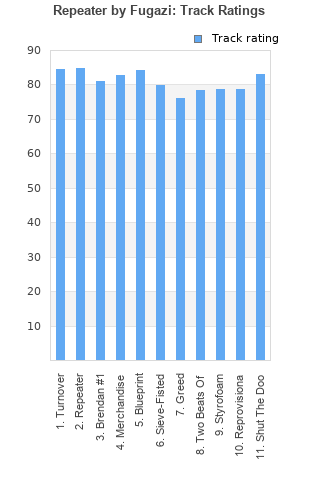 Rating metrics: Outliers can be removed when calculating a mean average to dampen the effects of ratings outside the normal distribution. This figure is provided as the trimmed mean. A high standard deviation can be legitimate, but can sometimes indicate 'gaming' is occurring. Consider a simplified example* of an item receiving ratings of 100, 50, & 0. The mean average rating would be 50. However, ratings of 55, 50 & 45 could also result in the same average. The second average might be more trusted because there is more consensus around a particular rating (a lower deviation).
(*In practice, some albums can have several thousand ratings)
This album is rated in the top 1% of all albums on BestEverAlbums.com. This album has a Bayesian average rating of 80.5/100, a mean average of 79.0/100, and a trimmed mean (excluding outliers) of 80.6/100. The standard deviation for this album is 16.6.

Amazing debut from an amazing band

You have to like punk to rate this properly. I find them to be the most creative band to cone out of the punk genre. Pioneers of the Post-Hardcore genre (before the genre got influenced by Emo music in the 2000s). This is a really good record. The Argument is their best in my opinion but this is a strong debut.

A masterpiece.Powerful frantic and raw, but also with voice duets which remind me of the Clash's debut album.
Also very well recorded and produced...sounds great!
P.S. i got into this one many years after its release (1990)...because Dischord is not a major and hadn't the marketing power of a major.

Such an angry, frenetic album. It's truly the band at their best.

This album changed the landscape of punk forever

It just hits me that these guys knew exactly what they were aiming aesthetically. This is a genuine punk album, and probbably the definitive emo record of all time. They used heavy weapons here, I think it is their masterpiece, acctually one of the most notorious and accomplished albums of that period and why not, of ever.

Vibrant and raw with interesting instrumentation

Your feedback for Repeater