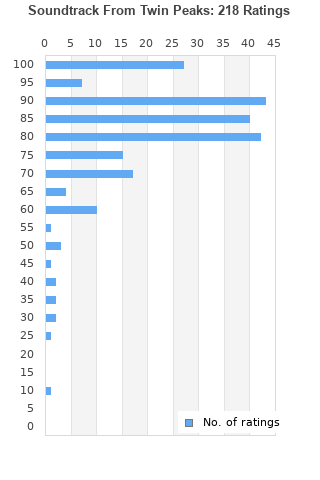 Soundtrack From Twin Peaks is ranked as the best album by Angelo Badalamenti. 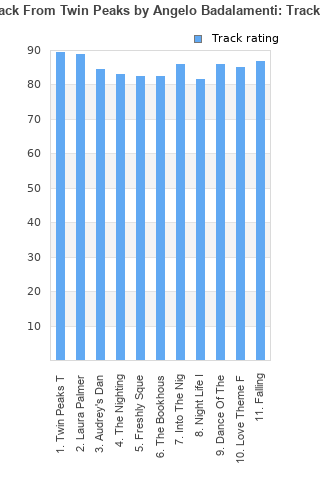 Rating metrics: Outliers can be removed when calculating a mean average to dampen the effects of ratings outside the normal distribution. This figure is provided as the trimmed mean. A high standard deviation can be legitimate, but can sometimes indicate 'gaming' is occurring. Consider a simplified example* of an item receiving ratings of 100, 50, & 0. The mean average rating would be 50. However, ratings of 55, 50 & 45 could also result in the same average. The second average might be more trusted because there is more consensus around a particular rating (a lower deviation).
(*In practice, some albums can have several thousand ratings)
This album is rated in the top 1% of all albums on BestEverAlbums.com. This album has a Bayesian average rating of 81.7/100, a mean average of 81.0/100, and a trimmed mean (excluding outliers) of 82.2/100. The standard deviation for this album is 14.4.

Hypnotic... brings me back memories ...

If you're familiar with the series, you'll recognize all of the music on this album. Brings back some great memories!

Great soundtrack to a great series(well, at least the first series), great music, both haunting and beautiful and brilliantly atmospheric. Julee Cruise's songs are lovely, especially, the nightingale, and, into the night. Some stunning jazz instrumentals too. Great lights out music. And yes, floating into the night, is a beautiful album from Julee Cruise, featuring songs from the second series of Twin Peaks as well as the songs from this album. The great thing is that it's happening again....

Perfect for turning a tranquil innocuous morning into one fraught with menace and hidden peril.

Best TV series. Ever. Yep, even better than X-Files ;)
I also love the soundtrack ! Angelo Badalamenti-David Lynch do great team work ! Their other stuff is really cool too.

I don't this but I have an album of his that he did with a woman singing lead..It was called "Floating into the night" with Julie Cruise... It was out in 1989? It is a really good album, very relaxing, very eerie voice

One of my favourite soundtrack albums. A really good album for putting on, relaxing and chilling out.

Your feedback for Soundtrack From Twin Peaks