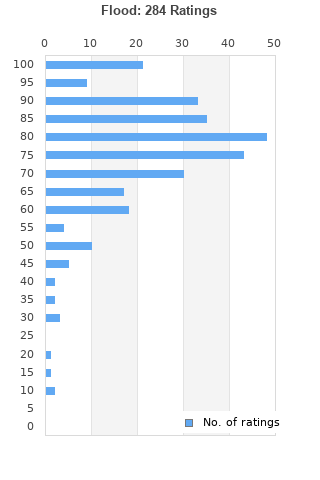 Flood is ranked as the best album by They Might Be Giants.

They Might Be Giants
Beachland Ballroom, Cleveland, United States.

They Might Be Giants
Beachland Ballroom, East Cleveland, United States.

They Might Be Giants
Beachland Ballroom, East Cleveland, United States. 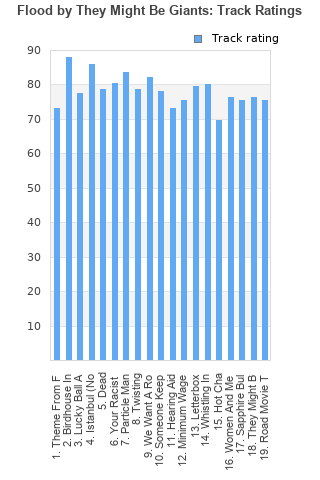 Birdhouse In Your Soul
Rating: 88 (102 votes)Comments:

Rating metrics: Outliers can be removed when calculating a mean average to dampen the effects of ratings outside the normal distribution. This figure is provided as the trimmed mean. A high standard deviation can be legitimate, but can sometimes indicate 'gaming' is occurring. Consider a simplified example* of an item receiving ratings of 100, 50, & 0. The mean average rating would be 50. However, ratings of 55, 50 & 45 could also result in the same average. The second average might be more trusted because there is more consensus around a particular rating (a lower deviation).
(*In practice, some albums can have several thousand ratings)
This album is rated in the top 6% of all albums on BestEverAlbums.com. This album has a Bayesian average rating of 76.4/100, a mean average of 75.6/100, and a trimmed mean (excluding outliers) of 76.6/100. The standard deviation for this album is 16.3.

I think the best TMBG albums are this one and Lincoln. Both have a little bit of filler and the filler is more on side 2 of both albums. With that said, beneath the zaniness which does have a charm, is some of the best pop songwriting of the 80s and 90s. This is true especially of John Linnell's songs.

Didn't give it a shot for a while because I figured it was simply a novelty album; Weird Al esque, who's music enjoy and find hilarious most of the time, but feel wrong comparing parody albums to traditional albums. Flood is not a parody album. It has it's fair share of nonsense and comedy, but each song is a unique stand-alone expression in it's own right. I mean, Particle Man is preceded by Your Racist Friend. Flood certainly belongs in 1990's Top 20.

classic album pushing the boundaries of pop rock into unchartered waters such as fantasy storytelling, absurdism and surrealism...

Joyful tomfoolery that plays it a little safer that their previous work.

There's times when I'm like I can't believe these guys have a music career... but then I listen to:

This is a hard album to rate. It is pretty far out there. But it is super enjoyable.

its pretty silly but i need some more of that. sometimes its good to have a band that doesn't take themselves seriously

funny and quirky on the surface, but with some quite pointed and poignant lyrics at times.

Your feedback for Flood