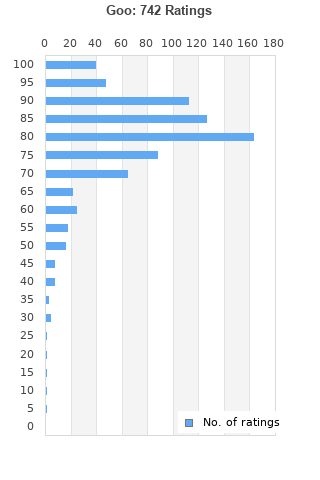 Goo is ranked 2nd best out of 35 albums by Sonic Youth on BestEverAlbums.com.

The best album by Sonic Youth is Daydream Nation which is ranked number 71 in the list of all-time albums with a total rank score of 19,301. 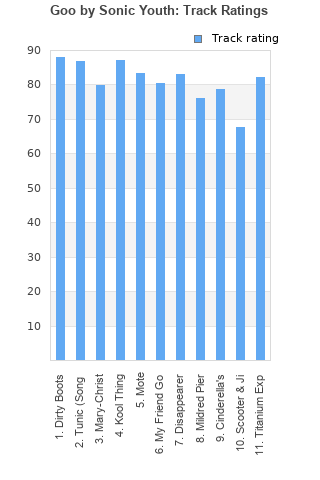 Rating metrics: Outliers can be removed when calculating a mean average to dampen the effects of ratings outside the normal distribution. This figure is provided as the trimmed mean. A high standard deviation can be legitimate, but can sometimes indicate 'gaming' is occurring. Consider a simplified example* of an item receiving ratings of 100, 50, & 0. The mean average rating would be 50. However, ratings of 55, 50 & 45 could also result in the same average. The second average might be more trusted because there is more consensus around a particular rating (a lower deviation).
(*In practice, some albums can have several thousand ratings)
This album is rated in the top 2% of all albums on BestEverAlbums.com. This album has a Bayesian average rating of 79.8/100, a mean average of 79.1/100, and a trimmed mean (excluding outliers) of 79.9/100. The standard deviation for this album is 13.9.

Dirty Boots is one of my favorite songs of all time. But as the album progresses it doesn't hold my interest in the same way as daydream nation. Obviously I still love it or it wouldn't be getting a 9/10 from me.

Sonic Youth were never my favorite, but this was the album that came closest to convincing me I was wrong.

This poppier approach works better for me than Daydream Nation.

Very good album but not their best. I like how they paid tribute to Karen Carpenter, that was nice. Good album to break into the '90's.

First 7 tracks are excellent, on par with their best albums. But then comes a 3 track run which sadly isn't as good. Not terrible, but not good enough for SY record. That being said there are a number of underrated songs here, especially the closer Titanium Expose and Mote which are so good. And yes, Dirty Boots is one of their best tracks, incredibly good. All in all another excellent Sonic Youth record.

Tight and professional; this might be a softer approach to their sound than previous albums, but Sonic Youth have made up for that with a mettalic, pertruding and edgy sound that never lets up. It was never going to reach the collosal heights of Daydream Nation - not many records do in my opinion - so instead of trying to out do themselves, they deliver a stunning first half that includes three of the best tracks they ever did.

The second side is weaker, but isn't without its moments, especially on the shrill noise-explosion that finishes Mildred Pierce and the utterly electrifying closer Titanium Expose that really does seal the deal. Its not as consistent as you want it to be, but there's no denying how epic that rising riff on Dirty Boots is, nor how thrilling the sense of motion on Tunic is. As for Kool Thing, I'd need several hours just to explain how badass every second of it is.

It's an album more for the singles than the complete product like their two prior records, but that different approach doesn't stop it from being a vital part of their discography. Proof that the band weren't just about huge, screeching noise rock solos; they could own the more generic


I've always loved Sonic Youth ever since a buddy introduced me to "Bad Moon Rising" way back in 1985 some 33 years past. 1986's "EVOL" had a profound effect on my music tastes and sits comfortably within my All-time Album list

Your feedback for Goo