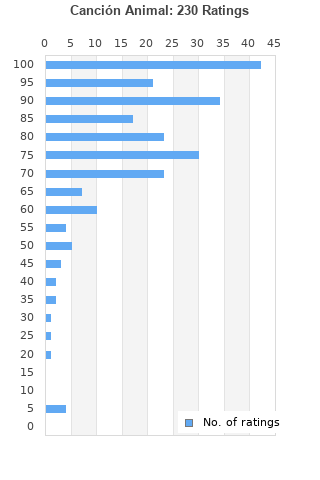 Canción Animal is ranked as the best album by Soda Stereo. 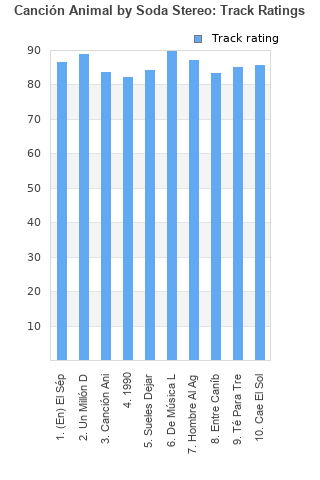 Rating metrics: Outliers can be removed when calculating a mean average to dampen the effects of ratings outside the normal distribution. This figure is provided as the trimmed mean. A high standard deviation can be legitimate, but can sometimes indicate 'gaming' is occurring. Consider a simplified example* of an item receiving ratings of 100, 50, & 0. The mean average rating would be 50. However, ratings of 55, 50 & 45 could also result in the same average. The second average might be more trusted because there is more consensus around a particular rating (a lower deviation).
(*In practice, some albums can have several thousand ratings)
This album is rated in the top 1% of all albums on BestEverAlbums.com. This album has a Bayesian average rating of 80.8/100, a mean average of 79.5/100, and a trimmed mean (excluding outliers) of 81.1/100. The standard deviation for this album is 19.4.

A fantastic collection of songs that never get dull and is extremely consistent with its quality. There are no skips on this record with every song bringing something to the table. The instrumentation is brilliant with it sounding so sharp and doing a great job at dragging us into the record with its infectious nature. The guitar work is vital in this as it is so unique and gives it a special Latin American feel which I love. The choruses do a great job in dragging in the listener as well with so many of these songs being stuck in my head hours after I have finished listening to this album. What makes this album such a great listen though is just how well they maintain their style and atmosphere as it makes the whole record feel cohesive and it makes the music feel like a proper experience for the listener. Overall, an extremely consistent listen that is packed full of amazing songs and brilliant music.

Amazing masterpiece of rock in spanish.
Almost all the songs of this album are classics of latin american rock.

I dont know if this is the best Soda album(i think its between This, Dynamo and Signos) but this is an absolutely a maspertpiece

After recording the heavily produced, African American-influenced Doble Vida with Carlos Alomar, Gustavo Cerati decided he wanted a new direction for the band and so their next album would feature a stripped down, live quality to favor the songs over studio effects. With this release Soda Stereo moved away from their New Wave origins and fully embraced the distorted romance of anthemic rock, creating a style that was very modern and alternative and yet had a very classic rock feel to it. Canción Animal is a masterpiece of raw elegance and infectious minimalism, where pumping basslines, explosive choruses and epic vibrato-abusing solos are the order of the day. From the controversial cover art, featuring two lions mating, to the iconic opening chords of 'De Música Ligera' (which has become Rock en Español's de facto anthem), this is Soda Stereo at the top of their game.

Your feedback for Canción Animal