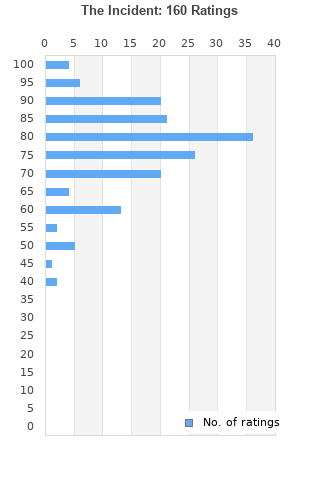 PORCUPINE TREE .. The Incident
Condition: Very Good
Time left: 4d 9h 3m 15s
Ships to: Worldwide
$43.99
Go to store
Product prices and availability are accurate as of the date indicated and are subject to change. Any price and availability information displayed on the linked website at the time of purchase will apply to the purchase of this product.  See full search results on eBay

The Incident is ranked 8th best out of 31 albums by Porcupine Tree on BestEverAlbums.com.

The best album by Porcupine Tree is Fear Of A Blank Planet which is ranked number 434 in the list of all-time albums with a total rank score of 4,533. 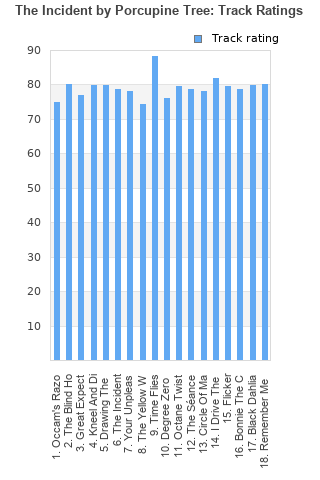 Rating metrics: Outliers can be removed when calculating a mean average to dampen the effects of ratings outside the normal distribution. This figure is provided as the trimmed mean. A high standard deviation can be legitimate, but can sometimes indicate 'gaming' is occurring. Consider a simplified example* of an item receiving ratings of 100, 50, & 0. The mean average rating would be 50. However, ratings of 55, 50 & 45 could also result in the same average. The second average might be more trusted because there is more consensus around a particular rating (a lower deviation).
(*In practice, some albums can have several thousand ratings)
This album is rated in the top 5% of all albums on BestEverAlbums.com. This album has a Bayesian average rating of 77.3/100, a mean average of 77.0/100, and a trimmed mean (excluding outliers) of 77.5/100. The standard deviation for this album is 11.4.

Maybe because I had heard their previous albums and was waiting for the release of something big, I found this album generally mediocre at first (except for Time Flies). However, it has been a grower and, though it isn't as good as their previous album, it has some good moments inside that "55 minute song" (and some dull moments too).
This has been their last album to date, now Wilson is foucsing on his solo work, which is valuable too.

It doesn't hold a candle to any of the 6 classic albums that came before it. Personally, I think the ep at the end is the best part (although Time Flies is pretty great)

Time Flies is the real standout point. Must say the "55 minute song" idea does work well for me. I'd like to be off to get some toast 10 minutes in.

It's one 55-minute long song (or song cycle, if you prefer, since the 14 parts do all have names). The format makes it a little daunting, but it's the same great mix of psychedelic and prog rock, and moves effortlessly between acoustic and metal.

Porcupine Tree weakest album in recent times. The biggest issue I have with the album is not necessarily the songs but the way they have been put together. It starts off well but into tracks 3 and 4 - it sounds like Steven Wilson is singing live to an audience a medley of his past hits that he doesn't have time to play the full length version. The medley is definitely more cohesive after Time Flies. I Drive The Hearse is also a highlight. The second disc to me is a much better effort although Flickr sounds a lot like a part in Anaesthetise. Steven is obviously starting to run out of ideas and I support him in his decision to retire Porcupine Tree.

Although Porcupine Tree is top-notch and features hooky melodies anyone can bob their head to, they aren’t afraid to embark on the grandiose compositions that can turn off mainstream listeners – the centerpiece of …Blank Planet was a 17-minute song called “Anesthetize” (very inspires in Radiohead, but improved. It would be my Radiohead's favourite song. And now they brought us a piece of 55 minutes divided in 15 parts, making their best job, inspired on Pink Floyd King Crimson and Radiohead. Their music is much better now in my point of view. I love this album. It's comforting Porcupine Tree has never dumbed down its sound in order to appeal to the masses. They didn't stop in the beautiful melodies of "in absentia", they went over just good but easier music. If anything, they’ve become more esoteric, and yet the masses keeping jumping on the bandwagon. Good thing, too – PT deserves every bit of success it gets, and it gets every time even better!

This album deserves credit for some of its artistic and powerful songs such as Black Dahlia and Octane Twisted,though the numerousness of the tracks may cause some songs to be overlooked.i suggest to hear them at least more than 2times!

Your feedback for The Incident