Fear Of A Blank Planet (studio album) by Porcupine Tree 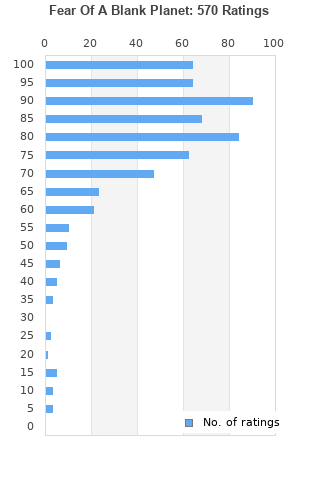 Fear Of A Blank Planet is ranked as the best album by Porcupine Tree. 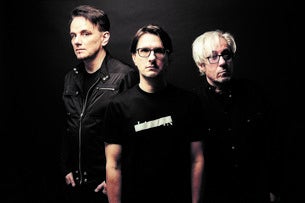 Listen to Fear Of A Blank Planet on YouTube 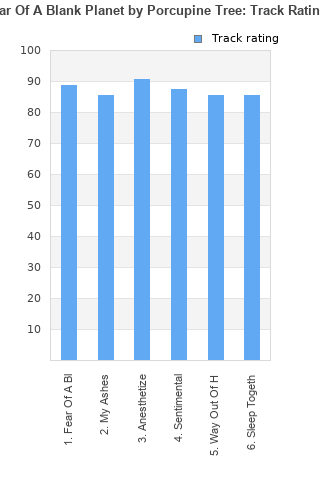 Fear Of A Blank Planet rankings

Fear Of A Blank Planet collection

Fear Of A Blank Planet ratings

Rating metrics: Outliers can be removed when calculating a mean average to dampen the effects of ratings outside the normal distribution. This figure is provided as the trimmed mean. A high standard deviation can be legitimate, but can sometimes indicate 'gaming' is occurring. Consider a simplified example* of an item receiving ratings of 100, 50, & 0. The mean average rating would be 50. However, ratings of 55, 50 & 45 could also result in the same average. The second average might be more trusted because there is more consensus around a particular rating (a lower deviation).
(*In practice, some albums can have several thousand ratings)
This album is rated in the top 1% of all albums on BestEverAlbums.com. This album has a Bayesian average rating of 81.4/100, a mean average of 79.9/100, and a trimmed mean (excluding outliers) of 81.5/100. The standard deviation for this album is 17.1.

Fear Of A Blank Planet favourites

Fear Of A Blank Planet comments

I've had this album on CD for several years and to be honest, I have not listened to it that much, mainly because I listen to a lot more vinyl than CD's! Having just bought it on vinyl and taken the time to properly listen to it, I have realised what I have been missing out on. Fantastic album, dark and more melancholy than some of their other work but a true listening pleasure.

Looking at the tracklist on this one, I have the feeling I might have underrated this. Only 6 tracks but they're all killer. Sleep Together is the weakest but still great. Anesthetize is a rarity - a 10+ minute song that I really like and that my millennial brain can handle sitting through without getting bored (quite apt given the theme of the title track). But it's incredible. My Ashes is beautiful too, and the title track is great. In the first 2 tracks alone you have the full spectrum of Porcupine Tree - the grungy angsty sound of Fear Of A Blank Planet followed by the serene elegance of My Ashes. That's why I love this band. Can't believe I ranked this as only their third best album!

Every song on this record is fantastic and is beautifully composed with every song being allowed to reach its full potential and its true conclusion. My favourite of these is Anesthetize, which is a breath taking 18 minute masterpiece. The lyrics are also brilliant as they discuss recent issues that are very relevant in todays society making it an easily accessible record. Every song is made to feel grand and important and that means the album keeps you hooked the whole way through with no filler songs at all. Overall, this album has made me very excited to look into this artist further as this record is incredible.

Good vibe with this album, somehow I didn't caught the hype.

I enjoyed the outsiders more than the heavy hitters. My Ashes is a gorgeous ballad and Sleep Together is the stuff of dreams (in the way someone like David Lynch would perceive dreams).

I agree with the fact that the music of Porcupine Tree (PT), brainchild of multi-instrumentalist and writer Steve Wilson, is defined as neo prog rock, although it still feels like such a definition is unable to capture the brilliance that typifies PT. More than Muse or Radiohead, PT compiles dark and hypnotic riffs, but does not deviate too far from classical and extremely solid songwriting. The accessibility of melodies bathing in melancholy makes "Fear of a Blank Planet" (2007) a record that stretches the line of the previous releases, even though the songs are heavier and slower here and there. For a good and complete understanding I can recommend reading "Lunar Park" by Bret Easton Ellis. The lyrics of the songs are based on that book. Wilson is not unique in his reflections on an alienated and bored youth and the emptiness that dominates today's Western society ("I'm totally bored, but I can't switch off" from "Anesthetize"). Technology no longer only offers solutions, but it encourages and promotes continuous use. But that’s exactly how technology undermines the social foundation of humanity and the emotional life of individual people. More and more people avoid public life and feel safe in their darkened room. What is worse: it does not look like people are revolting to straighten out what is currently completely out of balance. People can no longer detach themselves from the existential crisis with which they struggle day in and day out. They are driven to supermarkets like zombies, are effortlessly manipulated and exploited, but don’t seem to give a damn. No critical note. The use of drugs is also discussed. It’s easy to see the this and previous theme are connected. Young people turn away from a society in which they can hardly survive and flee in escapism through the use of drugs. They deny the outside world and don't even bother to find a reason to exist anymore.
Because of the effects and a daring choice of instruments (the basis of "Sleep Together" is a great synth riff) this is in no way a mainstream album. The rich, atmospheric carpets of sound (keyboard player Richard Barbieri of the legendary band Japan) are interspersed with bombastic dynamics. Also striking are the arrangements for strings (London Session Orchestra) that on "Sleep Together" are reminiscent of "I am the Walrus" of the Beatles.
In short: "Fear" is a very balanced and well-balanced album without weak moments. Wilson's vocals are good and, above all, very believable. All songs blend together almost unnoticed and are relatively long. Excellent arrangements and pretty good twists in the structure of the songs make “Fear” unmistakably a highly recommended piece of art.

This has a huge influence on me, thanks Porcupine Tree. Best album they've ever made.

The songs on this album deal with neurobehavioral developmental disorders common in 21st Century teenagers such as bipolar disorder and attention deficit disorder.
When asked why he wanted to touch on these challenging and serious topics, songwriter Steven Wilson replied "***k off, can't you see I'm busy on my f****** PlayStation?!?"

Your feedback for Fear Of A Blank Planet