The Mission (studio album) by Styx 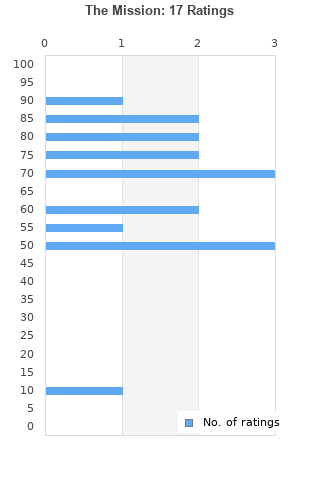 The Mission [LP], New Music
Condition: New
Time left: 2d 19h 9m 58s
Ships to: Worldwide
$42.90
Go to store
Product prices and availability are accurate as of the date indicated and are subject to change. Any price and availability information displayed on the linked website at the time of purchase will apply to the purchase of this product.  See full search results on eBay

The Mission is ranked 8th best out of 28 albums by Styx on BestEverAlbums.com.

The best album by Styx is The Grand Illusion which is ranked number 1877 in the list of all-time albums with a total rank score of 901. 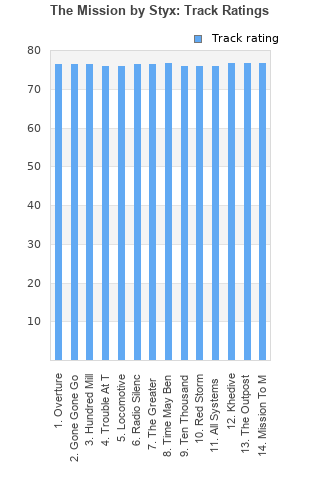 Rating metrics: Outliers can be removed when calculating a mean average to dampen the effects of ratings outside the normal distribution. This figure is provided as the trimmed mean. A high standard deviation can be legitimate, but can sometimes indicate 'gaming' is occurring. Consider a simplified example* of an item receiving ratings of 100, 50, & 0. The mean average rating would be 50. However, ratings of 55, 50 & 45 could also result in the same average. The second average might be more trusted because there is more consensus around a particular rating (a lower deviation).
(*In practice, some albums can have several thousand ratings)
This album has a Bayesian average rating of 70.3/100, a mean average of 67.9/100, and a trimmed mean (excluding outliers) of 67.9/100. The standard deviation for this album is 21.0.

Carrying on without original members Keyboardist/Singer Dennis DeYoung and Drummer Jon Panozzo, Tommy Shaw, James Young and Chuck Panozzo and replacement members Lawrence Gowan and Ricky Phillips craft an epic return to form concept album for the 21st century and beyond. This current incarnation hits all the right notes. For the past 20 years the guys have toured on the oldies circuit, but here they show that 50 years into their careers they still have the former magic. With Shaw leading the way, the guitars have never sounded with more emotional clarity and while some cliched lyrics here and there sometimes indicate a writer's block - the music shines and the vocal harmonies ring. Well worth a listen.

I have the best of Styx on CD and give it the occasional play in the car. Although I like most of the tracks I don't think there is anything that makes me 'sit up in my chair'. That isn't the case with 'The Mission'. This is a really excellent album. The Hammond organ and driving guitar and drums on 'Gone Gone Gone' is reminiscent of Deep Purple. 'Radio Silence' is an excellent finish to side one (I have the vinyl). The opener on side two 'For the Greater Good' has a cracking guitar solo which fits really well with the piano which leads the track. 'Time May Bend' is my favourite track, the bass synth, Hammond organ and vocal harmonies blend seamlessly. The piano led build of 'Ten Thousand Ways', coupled with the sound effects really works. As a concept album it really works and it is an album which I think will get a lot of play. There are nods towards 'War of the Worlds' on Red Storm and through the album generally imo.

Agree, this is better than expected. I like how they have kept the album to 40 min. There are a couple of nods to songs from the 70s set like Man in the Wilderness.

I haven't bought the album. Waiting for the 5.1 to come out. C'mon Tommy, you've bragged about how good it is. Give us the chance to listen.

While I was a fan of 1970's and early 80's Styx, I haven't listened to their new material since then, and hence had low expectations for this. I was surprised how good it was. 7.5/10

Your feedback for The Mission