The Blueprint (studio album) by Jay-Z 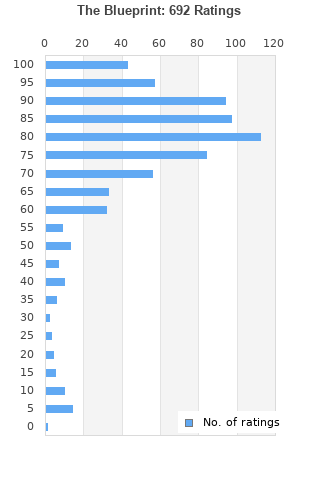 Jay-Z : Blueprint Vol. 2 - The Gift and the Curse CD 2 discs (2002)
Condition: Very Good
Time left: 7h 48m 5s
Ships to: Worldwide
$5.96
Go to store
Product prices and availability are accurate as of the date indicated and are subject to change. Any price and availability information displayed on the linked website at the time of purchase will apply to the purchase of this product.  See full search results on eBay

The Blueprint is ranked as the best album by Jay-Z. 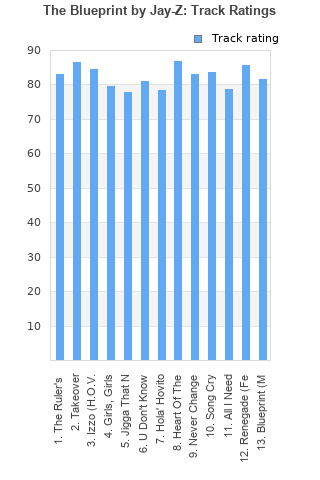 Rating metrics: Outliers can be removed when calculating a mean average to dampen the effects of ratings outside the normal distribution. This figure is provided as the trimmed mean. A high standard deviation can be legitimate, but can sometimes indicate 'gaming' is occurring. Consider a simplified example* of an item receiving ratings of 100, 50, & 0. The mean average rating would be 50. However, ratings of 55, 50 & 45 could also result in the same average. The second average might be more trusted because there is more consensus around a particular rating (a lower deviation).
(*In practice, some albums can have several thousand ratings)
This album is rated in the top 3% of all albums on BestEverAlbums.com. This album has a Bayesian average rating of 78.2/100, a mean average of 75.6/100, and a trimmed mean (excluding outliers) of 78.2/100. The standard deviation for this album is 20.8.

One of few Jay-Z albums that are consistently good, and it is incredibly good, every track is amazing.
except Girls, Girls, Girls

I like the music and production, but get tired of Jay not having much to say.

Jay-Z is that first-person shooter game that only has going for itself that it has slightly better graphics. Yes, his flow flows, but that's all. And then to hear his rapping go over snippets of The Doors' "Five to One" even borrowing the bass and percussion, I'm like what's the point? Like a lot of '00s rappers the beats are so random; just the minimum they need to get their flow going. Thankfully, Kanye brought some difference in that (but not as succesfully yet on every track of this album). But all that is no problem if the rapping is something exceptionally interesting to listen to, but to some of y'all rap can only be so enjoyable to listen to and your support for the game is just an act of political correctness. Lyrically though, he might be exceptionally interesting - although "Girls, Girls, Girls" makes me put huge question marks to that statement. He likes to have his cake and eat it; have his street cred and have a rich, book smart vocabulary. And rich his vocabulary is, and OG his history is, but unlike others I don't need my black heroes to conform to white standards of quality to call them genius, and I don't need my black heroes to conform to black standards of quality to feel justified to like them, respectively. They just have to make good music.

There's a reason this is known as his best; it lacks the filler that plagues so many of his other albums.

It’s JZ and one of his more highly rated albums. If you like his catalogue you’ll love this record

Another great album from the Jigga man. Better produced, in my opinion, than the other two albums I have listened to, as well as cooler bars.

Jay Z brought together an all star cast of producers for his sixth album, The Blueprint. Mostly produced by Just Blaze, Kanye West, and Bink, it also featured tracks produced by Timbaland, Eminem, and Trackmasters. THe production is just about perfect, particularly Kanye and Bink, though Kanye definitely is the top producer here. Jay's lyrics are pretty on point on this album, making for what is probably his best work overall.

Your feedback for The Blueprint