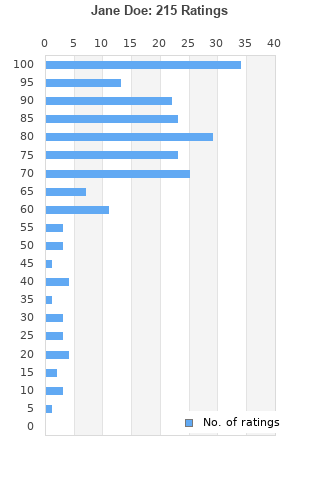 Jane Doe is ranked as the best album by Converge. 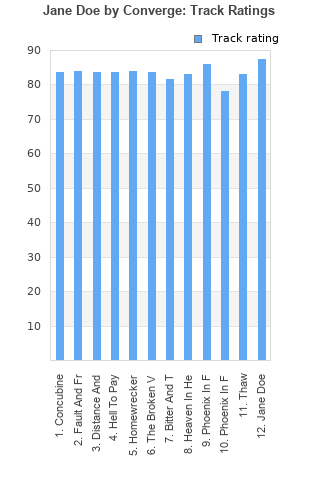 Rating metrics: Outliers can be removed when calculating a mean average to dampen the effects of ratings outside the normal distribution. This figure is provided as the trimmed mean. A high standard deviation can be legitimate, but can sometimes indicate 'gaming' is occurring. Consider a simplified example* of an item receiving ratings of 100, 50, & 0. The mean average rating would be 50. However, ratings of 55, 50 & 45 could also result in the same average. The second average might be more trusted because there is more consensus around a particular rating (a lower deviation).
(*In practice, some albums can have several thousand ratings)
This album is rated in the top 4% of all albums on BestEverAlbums.com. This album has a Bayesian average rating of 77.2/100, a mean average of 76.1/100, and a trimmed mean (excluding outliers) of 77.4/100. The standard deviation for this album is 21.5.

This album somehow feels like a million punches in the gut, but also easy to stomach. At least if you're used to metalcore, but Jane Doe is one of the best albums I've ever heard in its genre. There's a lot of variety in its song progressions, and even though you can't make out what the singer's saying, the lyrics are brutal and crushing when you look it up.

It's an album about a relationship slowly crumbling, and it certainly feels angry and full of emotion. The sounds of this album is still something I'm trying to look for in music, but it really doesn't get any better than this, at least for its genre. Which isn't a jab at other albums exactly, but this album is so cohesive, powerful, and amazingly produced for what it's going for.

A very heavy album that is packed full of rage and pure emotion that it is difficult to not be overpowered by the artists feelings. One of the main strengths is the consistency of the album with it maintaining the same aggressive vibe and atmosphere the whole way through. Also, the instrumentation is brilliant and the guitar work is some of the best I have heard on a metal album. However, I can understand some of the criticisms with the vocal as on some of the songs it is too wild and so loses the flow of the performance. Another weakness is that there are no real standout incredible tracks that blow me away which means there is not something to keep pulling me back to this record. Overall, this is a great Metalcore album which is just missing a few things that would make it a brilliant album.

Guys if you don’t like metal at all than why the hell are you even here. This website kills me sometimes with people giving albums a 5 /100 because it’s not their “type”

Highlights: All of Them.

One of the most complex and deeply rooted pieces of loud music ever recorded. Vile, poetic, emotional, and pure, Jane Doe is indeed a piece of music history. It needs more than one listen to get into, but once it has rampaged through your mind, it will quickly become one of the best things you'll ever hear.

It actually feels like this album is beating me up.

Cojo7 probably likes his metalcore full of cheese. I'm guessing his favorite bands are Bullet for My Valentine and Trivium.

Your feedback for Jane Doe