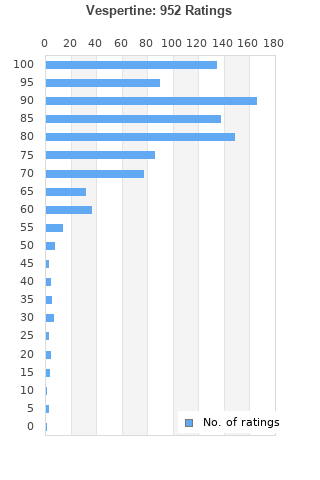 BJORK - VESPERTINE VINYL LP
Condition: New
Time left: 9h 17m 42s
Ships to: Worldwide
$37.18
Go to store
Product prices and availability are accurate as of the date indicated and are subject to change. Any price and availability information displayed on the linked website at the time of purchase will apply to the purchase of this product.  See full search results on eBay

Vespertine is ranked 2nd best out of 23 albums by Björk on BestEverAlbums.com.

The best album by Björk is Homogenic which is ranked number 100 in the list of all-time albums with a total rank score of 15,761. 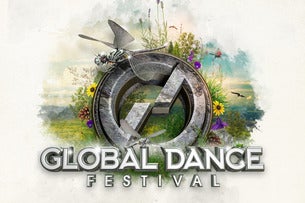 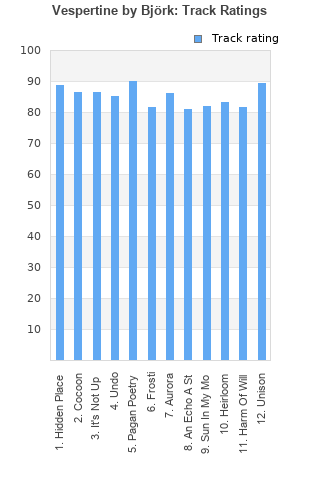 Rating metrics: Outliers can be removed when calculating a mean average to dampen the effects of ratings outside the normal distribution. This figure is provided as the trimmed mean. A high standard deviation can be legitimate, but can sometimes indicate 'gaming' is occurring. Consider a simplified example* of an item receiving ratings of 100, 50, & 0. The mean average rating would be 50. However, ratings of 55, 50 & 45 could also result in the same average. The second average might be more trusted because there is more consensus around a particular rating (a lower deviation).
(*In practice, some albums can have several thousand ratings)
This album is rated in the top 1% of all albums on BestEverAlbums.com. This album has a Bayesian average rating of 83.3/100, a mean average of 81.8/100, and a trimmed mean (excluding outliers) of 83.4/100. The standard deviation for this album is 15.5.

I've been listening to this compulsively (along with every other Björk album) for the past week or so. This is undoubtedly a beautiful and captivating album. I'm changing my rating from 95 to 100.

This is the first Björk album I've listened to, and I am immediately a fan. Such an incredible voice, great production, amazing songwriting. She's like Kate Bush but more eclectic. I'm sure I will like here other albums.

A Masterpice ladies and gentleman

A great talent that showcases great creative music in this album.

I am a big fan of Icelandic music and Björk is for me the perfect pop artist. "Vespertine" marks once again an evolution in the music of the artist, the album is cold and yet so warm, the beauty is at its peak! Björk writes with "Vespertine" his own fairy tale. It is not about poverty but about an album that aims on the contrary homogeneity, where Homogenic paradoxically spread on an extremely varied musical panel. This homogeneity is a richness, Vespertine listening as a story for children. Often the choirs carry the melody to peaks of emotion, it's magic. This is a wonderful album, magical and moving, which differs from the Icelandic discography by its extremely bright side. "Vespertine" is, for me, Björk's best album.

Beautifully magical across each track. Absolutely heavenly vocals and soothing instrumentals. The kind of album that makes you warm and fuzzy inside on a winter day.

Your feedback for Vespertine