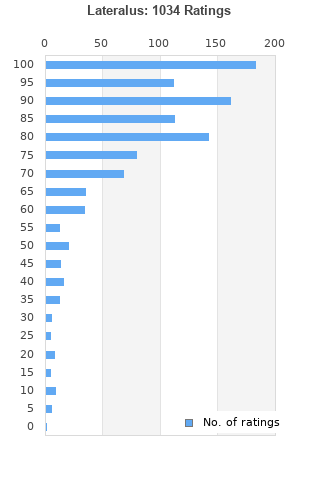 Tool Lateralus Double LP - Vinyl - Limited Edition Picture Disc
Condition: New
Time left: 10h 17m 57s
Ships to: Worldwide
$89.00
Go to store
Product prices and availability are accurate as of the date indicated and are subject to change. Any price and availability information displayed on the linked website at the time of purchase will apply to the purchase of this product.  See full search results on eBay

Lateralus is ranked as the best album by Tool. 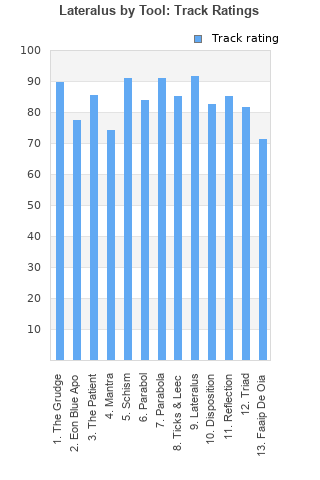 Rating metrics: Outliers can be removed when calculating a mean average to dampen the effects of ratings outside the normal distribution. This figure is provided as the trimmed mean. A high standard deviation can be legitimate, but can sometimes indicate 'gaming' is occurring. Consider a simplified example* of an item receiving ratings of 100, 50, & 0. The mean average rating would be 50. However, ratings of 55, 50 & 45 could also result in the same average. The second average might be more trusted because there is more consensus around a particular rating (a lower deviation).
(*In practice, some albums can have several thousand ratings)
This album is rated in the top 1% of all albums on BestEverAlbums.com. This album has a Bayesian average rating of 82.1/100, a mean average of 80.2/100, and a trimmed mean (excluding outliers) of 82.2/100. The standard deviation for this album is 19.9.

I generally prefer the heavier tracks in Tool's catalogue, but I still think their more proggy work is still fantastic

This is a really great album. I can definitely see why my boyfriend likes these guys so much. I'd give it a 100 but I'm a bit disappointed with the closing tracks, otherwise this album is amazing. "The Patient" is my current jam

One of my favorite albums on any given day. This work was brilliantly crafted and contains 5 of my top 10 Tool songs of all time. AEnima is a close second for me, but nothing seems to ever eclipse Lateralus.

Not a metal fan, probably could have like this a lot more if I did let it grow on me a little bit more.

In my opinion this album, Arcade Fire´s Funeral and Radiohead´s Kid A are the 3 best albums from the 2000´s. This albums.
This record is one the biggest musical tools someone could bring to humanity.
Absolutely brilliant.

To me Lateralus is Tool's magnum opus. Everything in this album is mindblowing. 100/100 no doubt.

One of my best album ever. It's amazing.

That definitely was not the spiral that Reznor has worked on

Your feedback for Lateralus