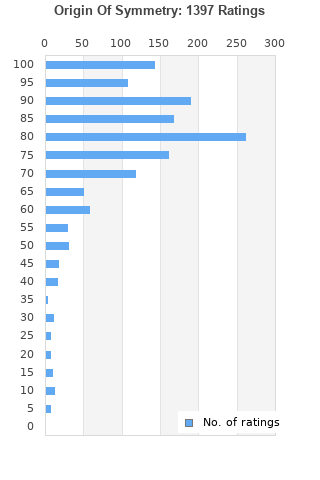 Origin Of Symmetry is ranked 2nd best out of 18 albums by Muse on BestEverAlbums.com.

The best album by Muse is Absolution which is ranked number 191 in the list of all-time albums with a total rank score of 9,179. 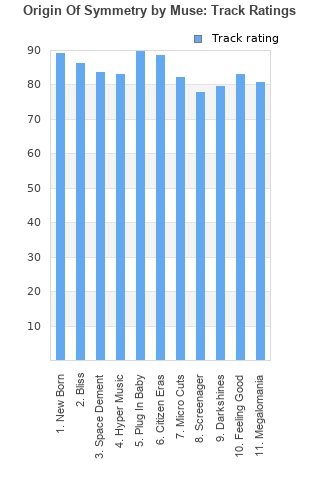 Rating metrics: Outliers can be removed when calculating a mean average to dampen the effects of ratings outside the normal distribution. This figure is provided as the trimmed mean. A high standard deviation can be legitimate, but can sometimes indicate 'gaming' is occurring. Consider a simplified example* of an item receiving ratings of 100, 50, & 0. The mean average rating would be 50. However, ratings of 55, 50 & 45 could also result in the same average. The second average might be more trusted because there is more consensus around a particular rating (a lower deviation).
(*In practice, some albums can have several thousand ratings)
This album is rated in the top 2% of all albums on BestEverAlbums.com. This album has a Bayesian average rating of 79.5/100, a mean average of 77.9/100, and a trimmed mean (excluding outliers) of 79.6/100. The standard deviation for this album is 18.1.

wish there was a snore emoji

A good album, second half is a big drop-off though especially the last track. My favourites are Plug in Baby, New Born and Hyper Music. My 2nd favourite Muse album (so far), behind The Resistance.

I love the sound they discovered on this album. New Born and Plug in Baby have to be some of my favorite songs. And the neo space rock feeling on Bliss sounds so fresh.

There is a lot of quality on display in this record, especially the vocal performance which is consistently amazing throughout. The drum work is also brilliant as it always is on Muse albums and the diversity it showed on each song meant there was a lot to explore. This record is a little slower than some of their other works and I did find that my concentration did waver whilst I was listening. It also is a little repetitive and most of the songs sound too similar for my liking. Overall, a fun and great album that isn't their best but is still a top album.

Solid sound and an amazing vocal performance. My one criticism is that the album felt a bit repetitive musically. Highlights: Bliss, Feeling Good, Screenager.

This was the building blocks and where Muse started to find their unique sound that led them to world domination. Personal favorite tracks (New Born, Plug In Baby, Feeling Good, Megalomania). Some filler tracks but overall a decent listen. The next two albums though, 'Absolution' & 'Black Holes' is where they hit their stride.

Here they were at their top of the game, so many memorable songs.

Your feedback for Origin Of Symmetry