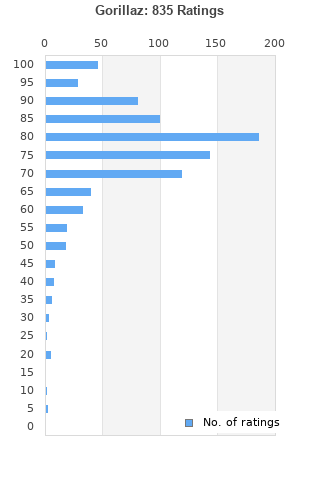 Gorillaz is ranked 3rd best out of 12 albums by Gorillaz on BestEverAlbums.com.

The best album by Gorillaz is Demon Days which is ranked number 128 in the list of all-time albums with a total rank score of 12,982. 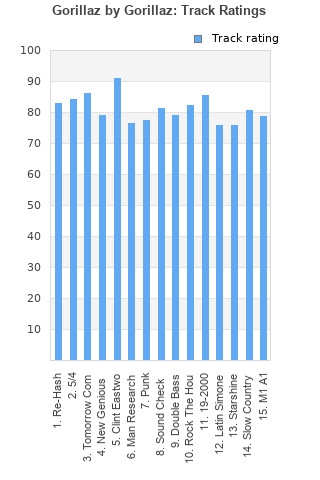 Rating metrics: Outliers can be removed when calculating a mean average to dampen the effects of ratings outside the normal distribution. This figure is provided as the trimmed mean. A high standard deviation can be legitimate, but can sometimes indicate 'gaming' is occurring. Consider a simplified example* of an item receiving ratings of 100, 50, & 0. The mean average rating would be 50. However, ratings of 55, 50 & 45 could also result in the same average. The second average might be more trusted because there is more consensus around a particular rating (a lower deviation).
(*In practice, some albums can have several thousand ratings)
This album is rated in the top 4% of all albums on BestEverAlbums.com. This album has a Bayesian average rating of 77.2/100, a mean average of 76.5/100, and a trimmed mean (excluding outliers) of 77.2/100. The standard deviation for this album is 13.9.

Nowhere near as good as Demon Days and Plastic Beach, but still contains two of their best songs - Clint Eastwood and Tomorrow Comes Today. And a few other gems too. As an album it doesn't really work for me. The last track is really long and annoying at times (I hate hidden tracks following 5 minutes of silence)

It's for sure a bit of a mess of an album but what's to be expected from such an ambitious collaboration of hip-hop, alternative and electronic sounds for it's time. There's some great songs, and some a bit bemusing, but nothing truly awful - even the songs that lean towards filler have interesting elements.

Strange and aloof; the album has an atmosphere that makes it sound amateurish and DIY. One-of-a-kind at least.

A pretty solid first album that combines a lot of hip hop and alt rock. A lot of catchy, memorable songs make it stand out, however its somewhat overshadowed by what Gorillaz would do in their second and third albums.

Although I like most of this, there were a few distinct moments of irritation.

A opener album that feels like a mix tape, Clint Eastwood steals the show.

Great. Even if there are some fillers, they're on very high quality.

Your feedback for Gorillaz