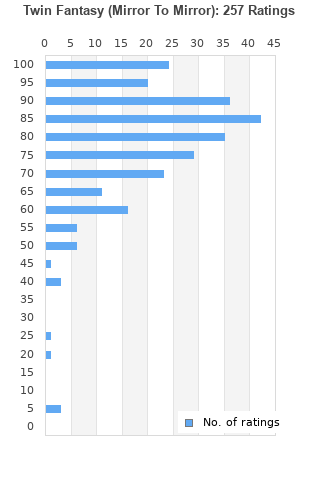 Twin Fantasy (Mirror To Mirror) is ranked 3rd best out of 16 albums by Car Seat Headrest on BestEverAlbums.com.

The best album by Car Seat Headrest is Teens Of Denial which is ranked number 212 in the list of all-time albums with a total rank score of 9,156.

Listen to Twin Fantasy (Mirror To Mirror) on YouTube 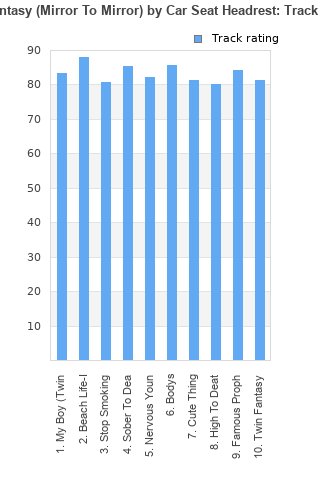 Rating metrics: Outliers can be removed when calculating a mean average to dampen the effects of ratings outside the normal distribution. This figure is provided as the trimmed mean. A high standard deviation can be legitimate, but can sometimes indicate 'gaming' is occurring. Consider a simplified example* of an item receiving ratings of 100, 50, & 0. The mean average rating would be 50. However, ratings of 55, 50 & 45 could also result in the same average. The second average might be more trusted because there is more consensus around a particular rating (a lower deviation).
(*In practice, some albums can have several thousand ratings)
This album is rated in the top 2% of all albums on BestEverAlbums.com. This album has a Bayesian average rating of 80.5/100, a mean average of 80.1/100, and a trimmed mean (excluding outliers) of 80.9/100. The standard deviation for this album is 15.3.

My second favorite album of the 2010s. So tender and heartfelt. Also the lo-fi aesthetic makes it leagues above the face to face version from 2018.

Well I heard this album after Face to Face so I can't say I like this one any better at all. FtF is perfection to me, and my favorite concept album, so obviously I like this one too but the production and instrumentation isn't quite there for me.

This is one of those album that either you absolutely love It or you hate It. I'm one of those that love It.
The thing is that Will Toledo isn't a Rockstar, you won't see him going around like he is some type of Jimi Hendrix, in fact i think you won't see him at all. Media can call him the new voice of Indie or something like that, but our generation doesn't need this, our generation of music listeners are most likely stuck at home doing nothing must of the time. We aren't heores, we aren't revolutionaries, we're just teens, we are just young adults, and through the lens of Will, we see an image of ourselves, screaming in our bed.
The lo-fi really works here, especially in the first half of the album, in the second, not so much, and that is the reason I still think their 2018 version is better, they remade "Cute Thing" and "High To Death" making them as enjoyable as for say "Sober to Death" that is especially good in lo-fi.
Anyway It doesn't mather wich version you like more, the two of them transmits the same message and are one of the best things I heard in a long, long, time.

crazy how this wasn't even added to this site for years after its release but now since it's been reworked this old version is about to break the top 2000.

Fantastic album full of emotion and great lyrics. The sound quality isn't the best, but I think it gives the album a bit of charm, without ruining it completely. An album that always helps me when I'm down.

When I have time to reevaluate my chart, this will be in my top 10 I assure you

Car Seat Headrest is one of the best indie rock bands on the decade.

Your feedback for Twin Fantasy (Mirror To Mirror)