Virtue (album) by The Voidz 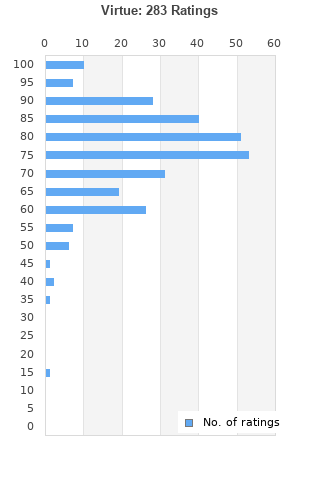 The Voidz : Virtue (Vinyl 12")
Condition: New
Time left: 4d 8h 18m 15s
Ships to: Worldwide
£23.46
Go to store
Product prices and availability are accurate as of the date indicated and are subject to change. Any price and availability information displayed on the linked website at the time of purchase will apply to the purchase of this product.  See full search results on eBay 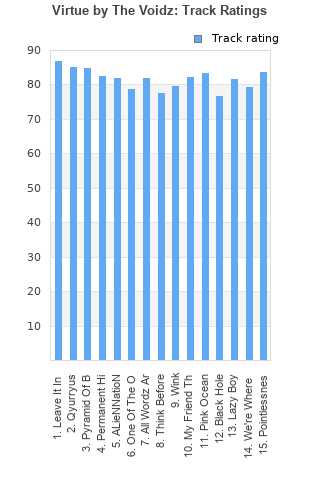 Rating metrics: Outliers can be removed when calculating a mean average to dampen the effects of ratings outside the normal distribution. This figure is provided as the trimmed mean. A high standard deviation can be legitimate, but can sometimes indicate 'gaming' is occurring. Consider a simplified example* of an item receiving ratings of 100, 50, & 0. The mean average rating would be 50. However, ratings of 55, 50 & 45 could also result in the same average. The second average might be more trusted because there is more consensus around a particular rating (a lower deviation).
(*In practice, some albums can have several thousand ratings)
This album is rated in the top 7% of all albums on BestEverAlbums.com. This album has a mean average rating of 76.0/100. The trimmed mean (excluding outliers) is 76.6/100. The standard deviation for this album is 12.9.

Criminal that this fell out of the top 20

A little overstuffed, but track-for-track, it's really something.

Strange album, i like it. Best tracks for me are Pyramid of Bones, All Wordz Are Made Up, My Friend the Walls, We're Where We Were, Pointlessness.

There are some good, maybe even great, songs but this album suffers from being way too long. About half the songs I'd consider filler.

Pyramid of Bones is brilliant

This album thrives off of variety and experimentation but lacks a notable cohesiveness, it also leaves something to be desired at times in terms of philosophical thoughtfulness.
However in terms of musicality alone all these songs bring something unique to offer and remain interesting throughout the album justifying its length. Fans of psychedelic and noise music should find this at least appealing. There is something for everyone here.

This album was a pleasant surprise for me. I never really got into the strokes, so I wasn't expecting to enjoy this album. This is much more experimental and unique and it has a lot of tracks which nailed their intended goal. The album could use more cohesion and consistency, but there are a handful of songs that really deliver such as Qyurryus and leave it in my dreams.

I love a good band that genre hops (Faith No More, Primus etc). Also a Strokes fan. So I am obviously enjoying this album. Could of dropped a few songs though (is there such a things as B sides anymore?). Looking forward to their tour of Ireland in October.

Your feedback for Virtue