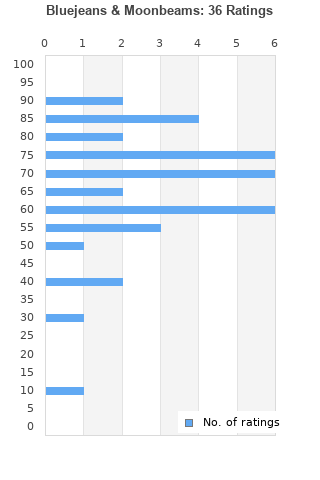 Captain Beefheart Bluejeans & Moonbeams EX
Condition: Very Good
Time left: 2d 22h 30m 52s
Ships to: Worldwide
£3.95
Go to store
Product prices and availability are accurate as of the date indicated and are subject to change. Any price and availability information displayed on the linked website at the time of purchase will apply to the purchase of this product.  See full search results on eBay

Bluejeans & Moonbeams is ranked 8th best out of 30 albums by Captain Beefheart & His Magic Band on BestEverAlbums.com.

The best album by Captain Beefheart & His Magic Band is Trout Mask Replica which is ranked number 224 in the list of all-time albums with a total rank score of 8,469. 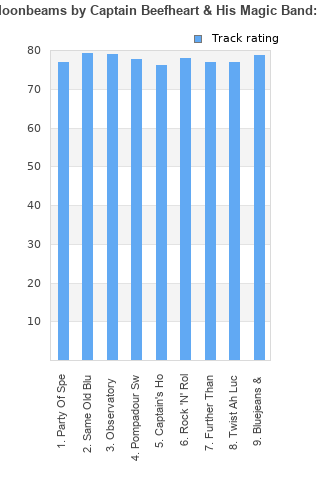 #
Track
Rating/Comments
1.
Party Of Special Things To Do
Rating: 77 (3 votes)Comments:

Rating metrics: Outliers can be removed when calculating a mean average to dampen the effects of ratings outside the normal distribution. This figure is provided as the trimmed mean. A high standard deviation can be legitimate, but can sometimes indicate 'gaming' is occurring. Consider a simplified example* of an item receiving ratings of 100, 50, & 0. The mean average rating would be 50. However, ratings of 55, 50 & 45 could also result in the same average. The second average might be more trusted because there is more consensus around a particular rating (a lower deviation).
(*In practice, some albums can have several thousand ratings)
This album has a Bayesian average rating of 69.8/100, a mean average of 66.6/100, and a trimmed mean (excluding outliers) of 68.6/100. The standard deviation for this album is 17.7.

Beefheart's most mainstream album. Given that Beefheart was one of music's weirdest and most complex genii, from whose mind came forth 1969's unsettling "Trout Mask Replica", it isn't hard to imagine that the captain was utterly confused while recording this album. It is said that musician Michael Smotherman had to push his face to the microphone when he had to sing, and had to gently guide him away from it when recording was done. Keeping this in mind, we can only marvel at the wide arrange of voices Beefheart provided for the album. Almost every song is sung in a different mood. And although the album failed to chart and still gets smashed by critics, I thinks it's one of the captain's finest albums, spanning over all kinds of genres, from jam sessions to Rolling Stones-like tracks to smooth love song with beautiful slide guitars en synths.

Much more accessible than your average beef heart album, but not mainstream by any standard. Thick blues with a beef heart spin. More melodious and standard instrumentation on the songs and the production is normal as opposed to trout mask style production.

His Blues album.
It´s not as extreme and avantgardistic as his other albums.
Maybe it´s nothing special but I like it.

Your feedback for Bluejeans & Moonbeams