Victory For The Comic Muse (studio album) by The Divine Comedy 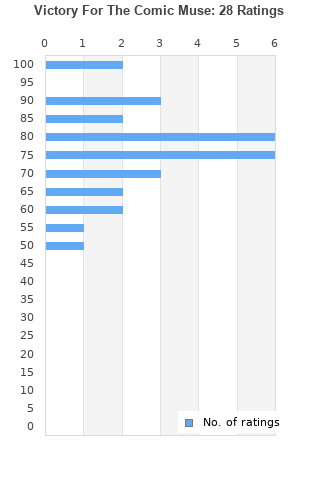 Victory for the Comic Muse (Reissue), The Divine Comedy, Audio CD, New, FREE & F
Condition: Brand New
Time left: 6d 17h 45m 31s
Ships to: Worldwide
£15.07
Go to store
Product prices and availability are accurate as of the date indicated and are subject to change. Any price and availability information displayed on the linked website at the time of purchase will apply to the purchase of this product.  See full search results on eBay

Victory For The Comic Muse is ranked 8th best out of 14 albums by The Divine Comedy on BestEverAlbums.com.

The best album by The Divine Comedy is Casanova which is ranked number 2629 in the list of all-time albums with a total rank score of 586.

Listen to Victory For The Comic Muse on YouTube 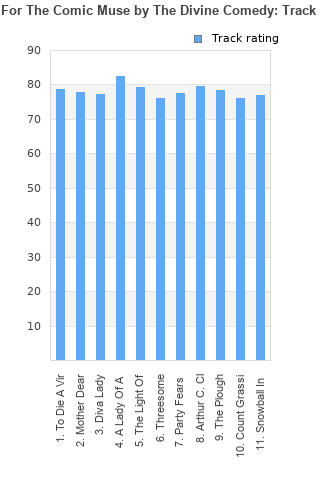 Victory For The Comic Muse rankings

Victory For The Comic Muse collection

Victory For The Comic Muse ratings

Rating metrics: Outliers can be removed when calculating a mean average to dampen the effects of ratings outside the normal distribution. This figure is provided as the trimmed mean. A high standard deviation can be legitimate, but can sometimes indicate 'gaming' is occurring. Consider a simplified example* of an item receiving ratings of 100, 50, & 0. The mean average rating would be 50. However, ratings of 55, 50 & 45 could also result in the same average. The second average might be more trusted because there is more consensus around a particular rating (a lower deviation).
(*In practice, some albums can have several thousand ratings)
This album is rated in the top 13% of all albums on BestEverAlbums.com. This album has a Bayesian average rating of 75.3/100, a mean average of 76.2/100, and a trimmed mean (excluding outliers) of 76.2/100. The standard deviation for this album is 12.5.

Victory For The Comic Muse favourites

Victory For The Comic Muse comments

"Victory for the Comic Muse" was the sequel to "Absent Friends ", where Neil Hannon worked with a full orchestra after having dissolved the original Divine Comedy. The album comes as a logical and natural musical extension of its predecessor, and Hannon's songwriting is still top notch.

The classics on this album are his tribute to an elderly lady "Lady of a Certain Age", the easy and catchy "Arthur C. Clarke" and the beautiful love song "The Light and Day". Furthermore, the album's three fine and catchy opening numbers ensures that you stay with the album. "Diva Lady" was a minor hit, and "To Die a Virgin" (Classic DC) was also issued as a single. On "Mother Dear" Hannon musically comes close to country and it works fine.

As usual you don't go wrong if you choose Divine Comedy as your company.

The Plough is by far the best thing on this one.

Your feedback for Victory For The Comic Muse