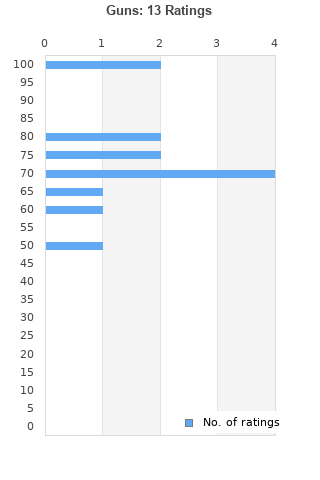 CARDIACS - Guns - CD - Import - **Excellent Condition** - RARE
Condition: Very Good
Time left: 16d 59m 46s
Ships to: Worldwide
$106.95
Go to store
Product prices and availability are accurate as of the date indicated and are subject to change. Any price and availability information displayed on the linked website at the time of purchase will apply to the purchase of this product.  See full search results on eBay

Guns is ranked 4th best out of 20 albums by Cardiacs on BestEverAlbums.com.

The best album by Cardiacs is Sing To God which is ranked number 2976 in the list of all-time albums with a total rank score of 504. 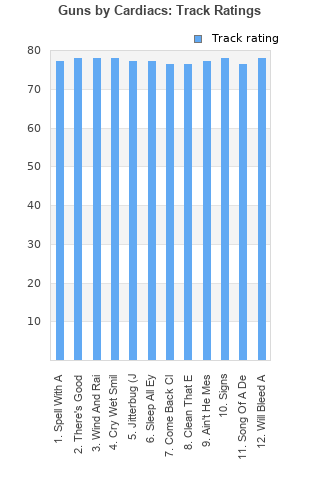 Rating metrics: Outliers can be removed when calculating a mean average to dampen the effects of ratings outside the normal distribution. This figure is provided as the trimmed mean. A high standard deviation can be legitimate, but can sometimes indicate 'gaming' is occurring. Consider a simplified example* of an item receiving ratings of 100, 50, & 0. The mean average rating would be 50. However, ratings of 55, 50 & 45 could also result in the same average. The second average might be more trusted because there is more consensus around a particular rating (a lower deviation).
(*In practice, some albums can have several thousand ratings)
This album has a Bayesian average rating of 72.1/100, a mean average of 71.0/100, and a trimmed mean (excluding outliers) of 71.0/100. The standard deviation for this album is 12.6.

If any album should have been called Sing to God, it's this one—thematically, it'd make a lot more sense.

The relatively wimpy, defeated vocals confused me for a long time before I realized how the singer's expression ties into the lyrical themes. Deciphering all that has been a lot of fun, and I recommend anyone who enjoys the music to spend some time with the lyrics themselves.

I do wish the production was a little better—I find the high end can get pretty shrill at times—but the music is absolutely solid straight through and well worth the time spent unravelling its secrets.

One of my personal favourite Cardiacs releases, with Jitterbug holding special value as an incredibly mesmerizing and transcendental experience.

Your feedback for Guns