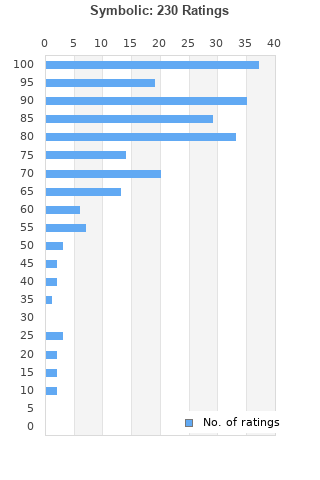 Symbolic is ranked as the best album by Death (Metal). 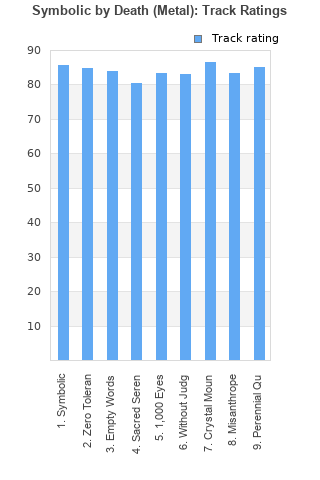 Rating metrics: Outliers can be removed when calculating a mean average to dampen the effects of ratings outside the normal distribution. This figure is provided as the trimmed mean. A high standard deviation can be legitimate, but can sometimes indicate 'gaming' is occurring. Consider a simplified example* of an item receiving ratings of 100, 50, & 0. The mean average rating would be 50. However, ratings of 55, 50 & 45 could also result in the same average. The second average might be more trusted because there is more consensus around a particular rating (a lower deviation).
(*In practice, some albums can have several thousand ratings)
This album is rated in the top 1% of all albums on BestEverAlbums.com. This album has a Bayesian average rating of 81.3/100, a mean average of 79.5/100, and a trimmed mean (excluding outliers) of 81.7/100. The standard deviation for this album is 19.2.

Probably their best in terms of composition but it lacks atmosphere, so I will always prefer Leprosy.

Symbolic was a game-changer for me.

This album intrigued and inspired me to keep going further down the rabbit hole as far as heavy music was. I've been a fan of a number of metal (and other forms of heavy) bands nearly since I got into music as a whole, but when I first heard this a couple of years ago, it flipped a switch. A drummer of 10 years at the time, I heard Gene Hoglan's playing and just kinda went ".......Oh.....". What an uncompromisingly brilliant set of drum performances.

Chuck's writing was never more consistently gripping than here as far as I'm concerned, and I say that having a lot of love for nearly the entire Death discography. His lyrics on Symbolic are sharp, poignant, and in some cases pertinent to what we are experiencing 25 years after the record dropped.

A blistering beauty and one of the most complete and completely engaging albums I can reference.

One of the best, if not the best, death metal albums ever. Chuck's songwriting is at its peak on this album, and while not quite as technical as Human, it is still extremely technical. A good starting place for someone who is interested in death metal.

The best songwriting overall across all death metal and easily in the argument for top 10 best metal albums period. This isn't them at their most brutal or even technical but them firing on all cylinders as a core unit. A true masterpiece of melody. Basically, it's fucking Symbolic. Anything else?

Not their most progressive nor their most heavy but it certainly features their best songwriting. nothing short of a masterpiece and one of the best albums ever released in any genre.

Ridiculously technical. 'Symbolic' was the first metal record that completely won me over. It's a complete record not a track by track experience. It blends speed, musicianship, melody and symbolic lyricism into an incredible listening experience. Listen to the 'Live in Eindhoven' if you haven't already.

One of the most technically impressive metal albums I've ever heard

Your feedback for Symbolic